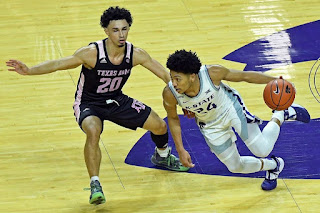 Texas A&M beat K-State 68-61 in Bramlage Coliseum yesterday.  Despite a slow start by K-State, it was a close game most of the way.  Nijel Pack kept K-State in it with 26 points and eight three-pointers.  DaJuan Gordon went down with a leg injury early in the first half and was seen in a boot after the game.  The extent of his injury is not known at this time, but he’s likely out for the next game.  Let’s take a look at some of the post-game reaction….

“We won the play hard for the first time in four or five games which gave us a chance.”…Bruce Weber, post-game

JM:  What good does winning the play-hard chart do if you still lose the game?  It’s fine to track individual statistics if you want, but keep it private.  You sound like a fool after a loss talking about how you beat them on the play-hard chart.  Who cares?  Did you score more points than they did?  If not, it doesn’t matter.  Playing hard should be a given EVERY GAME!  You shouldn’t have to create a chart to track who is playing hard and who is not.  I could get four other guys from my local gym and go out there and play hard and lose by 80.  What does that accomplish?

“I didn’t realize we took 35 threes to be honest until after the game. It’s too many, we have to be a little more patient.”…Bruce Weber, post-game

JM:  Forcing K-State to shoot three-pointers was Buzz Williams’ strategy all along….

“Well, No. 1 as you know we want to force as many contested threes as possible. We want to keep the ball out of the paint. We call it the box defensively. We don’t want to foul, most fouls occur in the box. We’ve done a very good job 35 percent of LSU’s possessions, they got to the box. Today, that number was 39%. That’s an elite level number. So if you’re not allowing it to get to the box, that means they’re going to shoot a lot of threes. Today 63 percent of their shots were from three, that’s perfect. Only if the next two things occur. No. 1 they’re contested threes. Then No. 2, because it’s going to be a long shot. It’s going to be a long rebound.”…Texas A&M coach Buzz Williams, post-game

JM:  Williams was responding to a question about the eight three-pointers by Nijel Pack.  He didn’t mention Pack once in his reply, just the fact that his goal was to make K-State shoot a lot of three-pointers, and if they accomplished that goal they were confident they would win the game. Which they did.

“Tom Izzo called me and told me that God couldn’t have beaten Baylor the other night.”…Bruce Weber, post-game

JM:  Nijel Pack has shown signs of greatness this season.  I hope being mentioned in the same sentence as Marcus Foster isn’t a sign that he might transfer as Foster did.

“K-State finishes its non-conference season with a 4-5 record, which included 3 consecutive victories after a 1-4 start… The Wildcats had a winning non-conference record every season since 1971-72.”…www.kstatesports.com, January 31, 2021

JM:  That’s 50 consecutive years of having a winning non-conference record that was broken this season.

JM:  These “K-State has not lost this much since….” futility records are getting really old.

JM:  I’m not sure exactly what the “tattling” comment means, but it got me to chuckle.

JM:  And Alabama can beat the New York Jets, right?  I understand the hyperbole.  It has looked this bad for K-State basketball this season.

Up next for K-State are games at Kansas and then Texas Tech and Texas at home.  All are ranked in the top 15.  Looks like it’s going to get much worse before it gets better for the Wildcats.

Wanted to take the opportunity to thank you for reading my blog.  It’s been growing and growing.  If you like my stuff, I’d appreciate a share on social media.  Thanks!