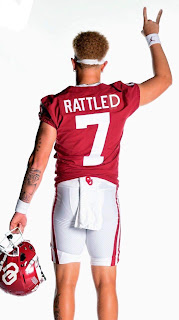 A short-handed K-State football team beat number three Oklahoma 38-35 in Norman yesterday in one of the biggest upsets in school history.   While it wasn’t always pretty, the Cats never gave up and fought valiantly to pull out the win.  Let’s take a look at what the players, coaches and media had to say about the victory.

“Any chance in the world Kansas State makes it two in a row against Oklahoma?”…Rece Davis, College Gameday

JM:  The College Gameday crew unanimously picked Oklahoma to win in a blowout against K-State.  Read on…

JM:  Lee Corso is just a caricature of himself anymore.  Granted, I wasn’t sure what to expect going into this one.  I picked K-State to cover the 28 point spread, but I didn’t predict a victory.  However, these guys are paid to be the “experts.”  They knew as little as we all did.

“Skylar Thompson threw for 334 yards and a touchdown and ran for three more scores as Kansas State upset No. 3 Oklahoma 38-35 in Saturday’s Big 12 clash in Norman, Okla.”…Reuters

JM:  Skylar was a beast in this one.  Never gave up, never got down on himself.  Just kept grinding.  Impressive.

JM:  This was the headline on FoxSports.  Headlines like this irritate me.  Did Oklahoma collapse or did K-State turn things around, keep playing hard, and play very well in the second half in order to pull the upset?  Was Oklahoma bad or was K-State great?  Let’s give the Cats some credit here, please.

“NORMAN, Okla. — A Kansas State squad that lost its opener to Arkansas State University two weeks ago, had its roster depleted by covid-19, and entered Saturday’s game against No. 3 Oklahoma as a four-touchdown underdog overcame it all to pull off one of the biggest stunners of the season.”…Associated Press
JM:  I think someone in Vegas knew about K-State’s depleted roster, which is why the line was set at 28 points.  This was a Rudy-like performance for K-State.  Unbelievable to think about.
“Blake Lynch booted a 50-yard field goal with 4:32 remaining to provide the margin of victory.”…Associated Press
JM:  This was a HUGE kick by Lynch that ended up being the game winner.  He isn’t getting enough credit for this.
“Kansas State Coach Chris Klieman said he didn’t know until Friday whether he’d have enough players available at all position groups to play the game. Turns out, the Wildcats had exactly what they needed.”..AP
JM:  This game was in doubt of being played up until Friday afternoon because it wasn’t known if K-State would have enough players available to field a full team.  This kind of reads like a Hollywood script when you think about it.
“You find out a lot about a person and about a team from a challenge and adversity, and this team responded,” (Skylar) Thompson said. “I had no doubt going into this game that we were going to have a chance to win just by the way that we handled the last two weeks, the way we practiced, the way we came together and corrected our mistakes.”...AP
JM:  Maybe last year’s victory gave Skylar some confidence going into this one.  Seems like nobody else gave them a snowball’s chance in hell of keeping this one close.
“Freshman Deuce Vaughn caught four passes for 129 yards and ran for a touchdown for the Wildcats. It was Kansas State’s first road win against a top-three team in the AP poll.”…AP
JM:  Deuce was on the loose against the Sooners.  This kid is gonna be a blast to watch the next four years.
“We knew when we were down 21, we were just like, we’re going to get our chance, we’re going to get our shot,” (Deuce) Vaughn said. “We’re going to see how good we are at battling adversity. That’s exactly what we did. When things started to turn our way, we were like we can’t get too high. We never got too low. We stayed even-keeled.”…AP
JM:  Such a true statement.  I could tell just by watching that the team never stopped fighting and just kept grinding away.  It was very impressive.  Kudos to everyone involved.
“Kansas State’s Nick Allen blocked Reeves Mundschau’s punt, and the Wildcats took over at the Oklahoma 38. Vaughn’s 38-yard touchdown run on the Wildcats’ second offensive play and the critical extra point tied it at 35-35 with 8:17 to play.”…AP
JM:  This punt block was HUGE!  Once K-State tied the game I had a good feeling that a victory was in the cards even though I was still very nervous until the interception of Rattler at the end of the game.
“Entering today, teams were 1-545 when trailing by 21 points vs AP Top-5 teams since 2004”…ESPN
JM:  This is an unbelievable stat.  What we saw was very, very rare.
“This one just meant a lot,” senior quarterback Skylar Thompson said. “We came off an upset loss at home and there were a lot naysayers outside our locker room that said a lot of things that raised my eyebrows a little bit. There was a lot of stuff going on.“We could have easily given up and come out and laid an egg today, but we didn’t.”…Kellis Robinett, KC Star
JM:  Sounds like the players had a bit of a chip on their shoulder as well.  Good.  Hope they keep it going into every game the rest of the way.

“There is something about this guy,” Klieman said. “When people want to count him out, he makes plays.”…Kellis Robinett, KC Star

“Keep in mind that K-State was down seven starters due to COVID-19 concerns and contact tracing.”…Ben Kercheval, CBS Sports

“In fact, five of the final six possessions of the game for K-State went as follows:

JM:  I do not look at this as a Sooner collapse.  I look at it as K-State changing up their game plan on offense and dominating the second half as a result.
“Deuce Vaughn is the modern Darren Sproles

You’re going to hear a lot about Vaughn now — namely that he’s 5-foot-5. Yes, he’s short, but he has big-play ability. He finished the day with eight carries for 45 yards and a touchdown. Not bad, considering the Wildcats had a hard time finding a consistent running game. That’s about 5.6 yards per carry. But where Vaughn really made his impact was in the passing game, where he had four receptions for 129 yards. Again, 77 came on one play, but he has great speed, and yes, he can get lost in the coverage a little bit. Either way, Kansas State knows how to use him. “…Ben Kercheval, CBS Sports

JM:  High praise for Deuce Vaughn.  Deuce is small in stature like Sproles and is shifty like him, but that may be where the comparisons end.  I don’t think he’s quite as fast or elusive as Darren was, but we will see how things evolve over time.

“In order to win, Kansas State needed help. Boy did the Wildcats ever get it. They won the turnover battle 4-0 while scoring 14 points off of a Seth McGowan fumble and a Rattler interception.”…Ben Kercheval, CBS Sports

JM:  Make no mistake, turnovers were the key to this game. However, it was a product of K-State playing well as much as it was the Sooners playing poorly.

“The first half was dominant,” (Lincoln) Riley said. “I remember thinking, ‘Man, I don’t even know how this game is this close right now.'”…Sam Khan, ESPN

JM:  I was stunned when the game was still 14-7.  OU had completely dominated the game up to that point and K-State was only down seven. OU out-gained K-State 171-12 in the first quarter!

“K-State had 302 offensive yards in the second half and averaged 10.1 yards per play in that span.”…Sam Khan, ESPN

“Knock on wood because who knows who’s gonna be available next week, you know?” Klieman said. “And that’s kind of what everybody has to realize on our team and across college football. This is a great win … OK, now we got to go back on Monday and see who’s available and get those guys ready to play, whoever that is. “I hate to say that and you guys don’t want to hear that, but that’s, unfortunately, the reality we’re living in.”…Sam Khan, ESPN

JM:  This is the unknown of the Covid world we are living in.  Especially with contact tracing forcing a two week benching.  We won’t know who is eligible to play week to week. It’s gonna make for an interesting season.

Here is a highlight package of the game from yesterday…

“Kansas State stunned Oklahoma 38-35 in a wild college football game at Owen Field on Saturday in which OU led 35-14 late in the third quarter. The Sooner grades reflect a total meltdown on both sides of the ball:”..Berry Tramel, The Oklahoman
JM:  And here’s the Oklahoma side of the story.  Never mind that OU only lost by three points and put up about 500 yards on the K-State defense.  Yet it’s a “total meltdown” to lose to K-State?  Gimme a break!
Up next is Texas Tech, who gave Texas all they could handle yesterday and probably would have won the game if they had recovered an onside kick.  Crazy how things work out.  Gonna be a fun one to watch.
Read more here: https://www.kansascity.com/sports/college/big-12/kansas-state/article246009145