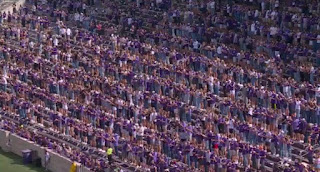 “We haven’t had a good week dealing with COVID already this week, with losing some guys,” Klieman said. “It’s just going to be a nonstop battle.”…Chris Klieman, Chris Klieman Radio Show, Thursday September 17

JM:  Wow, this doesn’t sound good.  I watched Chris Klieman’s media press conference this week and Klieman looks stressed, frustrated and depressed.  Definitely a different aura than we have seen from him in the past.

“Klieman said the Wildcats took the field against Arkansas State without 35-40 players last week. And around 12 of the active players that entered the game had been out for two weeks before getting the all-clear to return to practice about three days before the game.

“That’s not an excuse,” Klieman said, “it’s just a reality of where we are at.”…Kellis Robinett, Wichita Eagle, September 18

JM:  If something like this happens every week it’s going to be a long season.  The depth of talent on rosters such as Texas, Oklahoma and Oklahoma State would seem to give them a huge advantage in this Covid environment.

JM:  Here’s a positive from this week.  We’ll see if that translates to the game next week against Oklahoma.

“It’s difficult to be in college athletics right now and obviously college football,” Klieman said, “with the climate we are in and COVID-19.”...Kellis Robinett, Wichita Eagle, September 18

JM:  Klieman and his staff are trying to do what they can, but you can tell the stress it is putting on them, Klieman in particular.

JM:  One new case after testing on Sunday is a positive, however Klieman noted Thursday that it’s been a tough week and they’ve lost some additional guys to Covid.  K-State is testing thee times a week and I was only able to find the results of Sunday’s testing.

I’ve noticed that there is just about zero buzz or excitement around K-State football this fall.  I’m not really sure if it’s more Covid related or more of the social justice stuff that has turned off a lot of fans.  So I decided to take to Twitter to get a small pulse of the fan base.  Here is a sampling of comments that I found…

JM:  I think you get the point.  I personally know a few K-State season ticket holders that will not renew their tickets because of the social justice stuff that they feel is being shoved down their throats.  Right or wrong, it’s how they feel about it.  Kevin Kietzman mentioned on his podcast this week that he knows a lot of Ahearn Fund donors that told Gene Taylor they are done giving money to the program until they stop it with the social justice stuff.  This doesn’t really surprise me at all.  I’ve heard from numerous people that would normally watch all the football games that they have no intention of watching this season.  While Covid may be the reason people can’t attend the games, I think the fact that K-State is injecting politics into sports is the real reason that a certain percentage of the fan base just don’t care anymore.

Some say winning cures all.  Let’s hope Klieman can get them back on the right track and start winning some games.  That’s the only way the fans will come back and the excitement will return.