K-State improved to 2-0 in the Big 12 conference after a 31-21 victory over Texas Tech in Manhattan yesterday.  One major story line coming out of the game is the injury to starting quarterback Skylar Thomspon.  He was seen wearing a sling on his right arm in the second half.

“Here are the hits that knocked Skylar Thompson and Alan Bowman out of the game. Dirty or nah? pic.twitter.com/lVbZXhG4Dx

JM:  Granted I wear purple colored glasses, but the hit on Skylar Thompson by Texas Tech linebacker Riko Jeffers looked like a clear targeting call.  He led with his helmet right into Skylar’s left shoulder/head area.  Skylar must have hurt something in his right arm or shoulder after he was driven into the ground.  The hit by Khalid Duke on Texas Tech quarterback Alan Bowman, which knocked Bowman out of the game as well, looked like a legit tackle on a pass rush that happened to get him low in the legs.  With the starting quarterback on both teams out with injury, it led to a battle of the backups.  Neither Chris Klieman nor K-State has provided an update on Skylar Thompson’s injury. 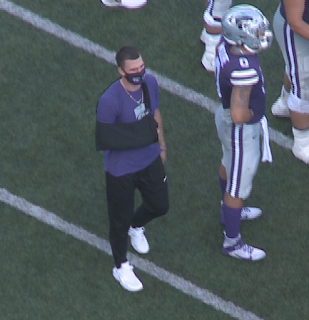 “He (Deuce Vaughn) has now amassed 439 all-purpose yards and scored four touchdowns as a true freshman. It usually takes players several years to get acclimated to K-State’s system before they start putting up those kinds of numbers. Vaughn is doing this straight out of high school.”…Kellis Robinett, KC Star, October 3, 2020.

JM:  True freshman Deuce Vaughn has been nothing short of amazing after three games in a K-State uniform. He was fantastic again yesterday and was probably the reason K-State was able to hold onto the victory.

“K-State quarterbacks trust (Briley) Moore as much as any receiver and proved it in this game. Thompson hit Moore for a 12-yard touchdown in the first quarter and Howard found him across the middle for a 66-yard catch in the fourth quarter when the Wildcats badly needed a big play trailing 21-17. Moore caught the ball and then tip-toed his way up the sideline for a huge gain that set up running back Harry Trotter for a touchdown moments later.”…Kellis Robinett, KC Star, October 3, 2020.

JM:  Tight End Briley Moore has been another bright spot for the Cats after three games.  It’s too bad we only have him for one year as a grad transfer from Northern Iowa.

“It’s rare to see a team block three punts in an entire season. The Wildcats are on pace for 10, one in every game.”…Kellis Robinett, KC Star, October 3, 2020.

“RB Deuce Vaughn had a stellar game for K-State as he rushed for one TD and 113 yards on 16 carries in addition to catching three passes for one TD and 81 yards.”…CBS Sports, October 3, 2020

JM: At the 5:02 mark, here is Vaughn’s game clinching touchdown in the 4th quarter…

“We knew they wanted to blitz and put a linebacker on me,” Vaughn said. “When I saw that, Will and I looked at each other and thought we had a good matchup.”…Avery Osen, Associated Press, October 3, 2020

JM: Great awareness by both true freshmen prior to the touchdown pass.

“We have to play exceptional special teams and we have to play really good on defense because we’re going to grind out games,” (Chris) Klieman said. “That’s what this league is about. They’re four quarter games and you have to find ways to minimize mistakes — we didn’t turn the ball over again today, which is positive — and made a play on special teams, which usually leads to success.”…Tyler Kraft, Manhattan Mercury, October 3, 2020

JM:  No turnovers, a blocked punt and an interception in the end zone were all huge for the Wildcats yesterday.

“So proud of the fact that we were able to come back after being down 21-17,” (Chris) Klieman said. “I told the guys in the locker room that (today) was as great of a win as the Oklahoma game a week before. This was bigger because we had to bounce back from a big road win and we came back and played really well against Texas Tech and found a way to win.”…Ryan Black, Manhattan Mercury, October 3, 2020

JM:  Since the Cats ended up winning the game by 10 points, it’s easy to forget that this was another come from behind victory that looked pretty dire when down 21-17.

K-State travels to TCU next Saturday for a 3:00 game on Fox. TCU lost to Iowa State by three points two weeks ago and beat number nine Texas in Austin 33-31 yesterday.  This one won’t be easy for the Cats.  Look for Will Howard to start the game at quarterback.  Should be very interesting to watch.