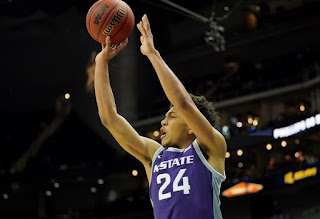 A good win in game one of the Big 12 tournament tonight for K-State, beating TCU 71-50.  Nijel Pack led the Wildcats with 23 points, making five three-point baskets.  Mike McGuirl added 17 points. A strong defensive performance and a 16-0 run helped propel K-State to the victory.

The competition gets much more difficult tomorrow against number one seed Baylor.  Baylor beat K-State twice during the regular season, by 31 points in game one and by 48 points in game two.  I’ll be very surprised if the game tomorrow is close, but I guess you never know.  There’s a reason it’s called March Madness.

Just a couple of post-game quotes from Bruce Weber….

JM:  Trust me, we know you’ve got all young guys.  Also, this sure doesn’t sound like a coach that’s ready to retire, does it? 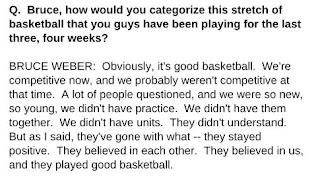 JM:  Let’s not go overboard here.  K-State has won five Big 12 basketball games all season.  They’ve beaten TCU twice, Iowa State twice, and Oklahoma one time.  The team has improved defensively and it was nice getting a comfortable win, but let’s see what happens tomorrow before breaking your arm patting yourself on the back.

The Baylor game tomorrow tips off around 1:30 PM on ESPN.