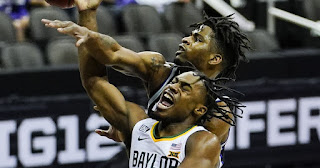 The Kansas State basketball team played its best game of the season yesterday afternoon.  Unfortunately, they saved that effort for a game against one of the best teams in the country, the Baylor Bears.  Baylor won the Big 12 quarterfinal game 74-68.  Some K-State fans on social media celebrated the loss as if Bruce Weber had just led the Wildcats to the national championship.  It was quite bizarre to witness.  The fans weren’t the only ones celebrating.  Bruce Weber and his assistant coaches and players were very excited and enthusiastic after this game.  Even athletic director Gene Taylor got in on the act with his first basketball-related tweet of the season.

I had to get a night’s sleep in before writing this wrap-up to make sure I’m not living in some kind of bizarro world where losing is now winning and winning is now losing. Turns out it was real life and not bizarro world after all.  There is a lot to digest about what happened yesterday, so let’s dig in….

“Proud of them, the two freshmen, Davion, Nijel.  We said use it as motivation, not getting picked on any of those teams, not getting any recognition.  I think they made a nice statement the last two days.”…Bruce Weber, post-game

JM: Davion Bradford and Nijel Pack both played great against Baylor.  If both can stick around for four years, the future looks bright on the inside and outside for K-State.  Baylor has a few players that will be playing in the NBA and Bradford and Pack held their own against them.  Bradford is the most skilled and athletic center K-State has had in I don’t remember how long.  He had a career-high 18 points yesterday, with 15 of those in the first half.  Pack had 18 points on six three-pointers, the most for a K-Stater in the Big 12 tournament since Lance Harris had seven against Kansas in 2005.

“DaJuan I told him this morning he had a tough task to play one of the toughest players in the country in Vital, and I said, “you’re going to have to match his energy,” and I thought DaJuan did that.  With how hard he played he gave us a chance.”…Bruce Weber, post-game

JM:  DaJuan Gordon added 15 points for the Wildcats.  Bradford, Pack, Gordon, and Selton Miguel form a solid nucleus for this team moving forward as long as they continue to progress.

“Last night about 2:00 a.m. I was cramping literally, and it wears you out.  But I got up this morning ready to play and ready to coach, and I thought our guys did the same thing.”…Bruce Weber, post-game

“It’s funny, my daughter asked me this the other day.  She said, Dad are you retiring?  I said, No, why?  And she said some — I don’t know who it is, some dude on social media said I was retiring.  I asked his name and I never even heard of the guy, to be honest.”…Bruce Weber, post-game

JM:  “Some dude” was Jeff Ermann with 247Sports, who tweeted it out on March 8th.

Weber shot it down, so it looks like there’s nothing to see here.

“I talked about Davion, what he — I texted him after he didn’t get any recognition.  I thought Nijel really should have got recognition even though Davion, I thought is as consistent as any guy and played against some of the best big guys in the league and handled himself well.”…Bruce Weber, post-game

JM:  Weber seems very bent out of shape that Bradford and Pack did not get selected to the Big 12 all-freshman team. He’s mentioned it three or four times during press conferences in the last week.  I’m sure they’ll start getting recognition if and when they start winning.

“A homeless guy yesterday when I was walking around the hotel, he said, Hey, Coach Weber, the difference between Kansas and Kansas State?  Kansas reloads and you got to rebuild.  Like that homeless guy is pretty smart.”…Bruce Weber, post-game

JM:  A homeless guy talking smack to Bruce Weber is the most Bruceketball thing ever.  Homeless Guy 1, Bruce Weber 0. 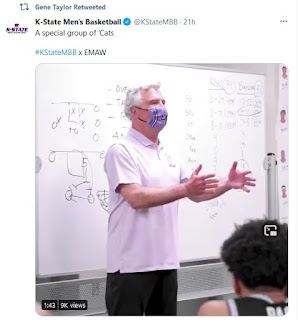 JM:  Athletic director Gene Taylor hasn’t tweeted about basketball all season long.  He gave Weber his vote of confidence a few weeks ago and told a couple of newspaper reporters that he’s not thinking about making a change.  After the loss yesterday, he retweeted a video of the coaching staff speaking to the team after the game about how much they have improved and how much the staff is looking forward to next season.

Bruce Weber has had Big 12 records of 5-13, 3-15, and 4-14 in his nine seasons coaching K-State.  He has had a winning league record in four seasons and a losing league record in five seasons.  In two of the seasons that he had winning league records he was 10-8, so only one game over .500.  His overall Big 12 conference record is 76-86.  He’s lost 20 games two seasons in a row.  Yet he is beloved by the administration and a good percentage of the K-State fan base.  It was quite bizarre witnessing the social media reaction after the loss yesterday.  A lot of fans were celebrating as if the team had just won the national championship.

I do understand that the team is playing a lot better, especially defensively, and that they played their best game of the year yesterday, but I don’t quite understand what all the excitement is about.  I wrote an article for Heartland College Sports about how Bruce Weber-coached basketball teams rise up to play great games from time to time only to follow it up with disappointment. Unfortunately, you can’t count on this team getting a lot better next season.  Sure, they will likely get a few more conference wins, but I don’t see much to get excited about.  Bruce Weber doesn’t really develop players over time.  Case in point, look at DaJuan Gordon and Antonio Gordon.  They were basically the same players this year as they were last year.  I could make the case that Antonio regressed instead of progressed.

Something else concerning to me is K-State’s 2021 recruiting class currently ranks last in the Big 12 and 106th in the country.  There’s not much help on the way and they do need some help.  But that’s a topic for a future post.

Time to watch Baylor and Oklahoma State.  Should be a good one.