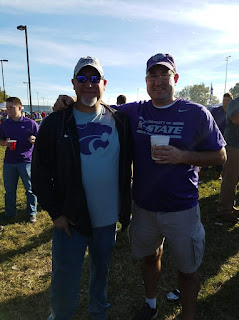 My friend and K-State superfan Scott Thomas died early this morning after a battle with lung cancer.  He was 50 years old.  A mutual friend and I drove to see him in Hutchinson yesterday.  He was aware we were there, but he could not really speak or communicate with us.  It was hard to see him in that condition, but I’m glad we made the last-minute trip to spend some time with him.  Just hours after we left he was gone.

Scott and I met in the early ’90s at K-State and he was a couple of years ahead of me in school.  We both lived in Moore Hall and we sang in Men’s Glee Club together.  We traveled together on some east coast trips with Glee Club, one year to Washington DC.  We had a concert in Lincoln, Nebraska the day before one of the K-State/Nebraska games and the Nebraska athletic department gave us free tickets to sit on the sideline behind the team benches.  The problem was that it was hard to see the game from those seats.  After about 10 or 15 minutes we decided to walk up to the K-State fan section in one of the corners of the stadium to see if we could find seats up there.  There were no seats, but we were able to stand behind the seats at the very top of the stadium.  That was fine with us.  At least we could see the game.  That game happened to be broadcast on ABC and there is a camera shot of the K-State crowd after a K-State touchdown and you can see Scott and me on tv.  It’s kind of grainy, but I call it our cameo on ABC! 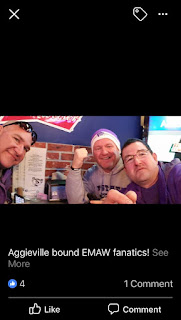 Scott and I lost touch after college as many people do until this thing called Facebook came along.  We reconnected and found out that not only did we have singing and K-State sports in common, but Star Wars movies, Marvel comic book movies, and a Star Wars spoof movie called Spaceballs.  Either of us could quote any line from that movie at any time in almost any context.  Both of us also had a huge crush on Princess Leia, especially the Return of the Jedi version.  All of these commonalities made our Facebook and personal interaction fun, which I will miss. 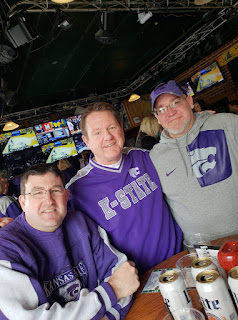 After we reconnected on Facebook, we met up at a tailgate at a football game about five or six years ago and we ended up meeting up at one or two games a year since then.  I started a K-State fan group on Facebook and he was one of the first members of the group and was very active in it.  We talked about K-State sports a lot.  Scott may be the only person I know with more purple clothes and K-State gear than myself.  He was an avid K-State sports fan, especially of the football and basketball teams, and was one of the only people I knew that followed the teams as closely as I do.  He had a sense of humor about a lot of things, which I appreciated.  Not even two months ago he commented on social media that dying of cancer was more fun than watching this Bruce Weber-coached K-State basketball team.  You had to know Scott to find the humor in that, because even though he had a long, hard, painful cancer fight he kept a positive and oftentimes humorous attitude about it, at least publicly 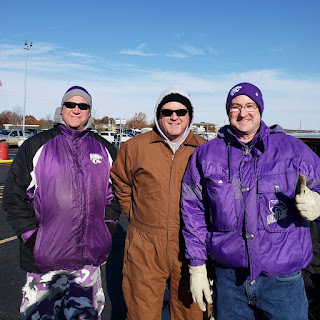 One of the last times I hung out with Scott was at one of our EMAW Fanatics tailgates for the West Virginia game on November 16, 2019.  We got to the lot very early, before the parking attendants, moved the barricades and pulled in to find a spot to set up.  Scott was in charge of music so he played a list of his favorites.  We had a blast.  After we visited, ate, and drank for a few hours, most of the group left early to head into the stadium, leaving Scott, Tracey, and I to clean up and pack up since it was mostly my equipment.  We were having a heckuva time getting the canopy folded up into the storage sleeve and we were all cursing and laughing about it.  We all liked to rib each other and this was another one of those moments.  We were all laughing so hard we were crying and I remember Scott saying “what are we laughing at?”  None of us knew, but it didn’t matter. 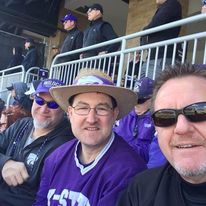 That weekend is the weekend Scott told us that his doctor found something odd on his MRI and he had some tests the week before the game and he was going to get his results on Monday.  He thought it might be cancer, but they weren’t 100% sure yet.  It turns out that it was stage four lung cancer and he began chemotherapy shortly thereafter.  16 months later he is gone.

Scott and I attended Bill Snyder’s last home game together in late November of 2018.  K-State wasn’t great that year and there was a sparse crowd.  We both had season tickets, but he came to the game solo and I was the only one in my group that attended.  I ended up sitting with Scott and we were in one of the sections on the east side of the stadium on about the 5-yard line about 10 rows back from the field.  It was chilly that night, but we didn’t care.  We had a blast sitting together, talking football, and cheering until we were hoarse.  K-State won the game and we had a great time yelling for the defense. talking K-State sports and doing a lot of laughing.  Scott won’t be in attendance at Bill Snyder Family Stadium this fall, so we’ll all have to cheer a little bit louder to make up for his absence.  I’ll miss him.

Rest In Peace, Scott.  One of Kansas State’s biggest fans.