K-State’s next opponent is Bowling Green.  Here’s 10 fun facts I found about the University and football program. 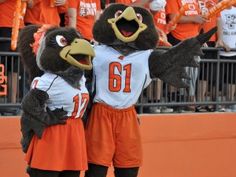 I found an interesting write-up about the history of the school nickname.  They used to be called “The Normals” before it was “The Falcons.”

Until 1927, Bowling Green State University was referred to as Bowling Green Normal College, for its teacher training curriculum. The school’s nickname was “The Normals.” That year a man named Ivan “Doc” Lake, who was a distinguished 1923 graduate of the university, and active athletics booster, suggested that the university needed a new nickname. Doc Lake, then a sports reporter for the local Sentinel Tribune newspaper, had just finished reading an article about falconry. He suggested the university rename its nickname and mascot, “The Falcons.” He felt the bird was a fierce fighter with speed and courage. Doc Lake’s suggestion of “The Falcons” met with instant general approval by members of the university. In fact, in 1955 the U.S. Air Force would also adopt the falcon as their mascot at the academy in Colorado Springs, Co.

3)  Bowling Green is led by first year coach Scot Loeffler, who is the 20th head coach in the history of the program and was previously the deputy head coach and offensive coordinator at Boston College.

7)  The Bowling Green football team began playing in 1919, making this their 100th year of playing football.

8)  Bowling Green has won or shared a conference championship 17 times, including 12 times in the MAC.

9)  Bowling Green’s main rival is Toledo.   The rivalry, nicknamed “The Battle of I-75,” dates back to 1924, when BGSU challenged the participation of Toledo’s captain, Gilbert Stick, after it was discovered that Stick also played for a local team in Genoa, Ohio. Conference rules did not prohibit such play, and BGSU’s protest was overruled.  In 1950, Toledo’s athletic director charged BGSU students a higher price for tickets at a basketball game than the general public, while rumors spread of a dog-napping attempt by BGSU against Toledo’s mascot.  Another incident came in 1951, when a fight broke out after a hard hit by a BGSU player on fullback Mel Triplett. Don Greenwood, then Toledo’s coach, participated, and resigned after the university failed to back him up. In Greenwood’s view, the officials should have called a penalty for excessive roughness, and he had a duty to protect his players.  Toledo leads the series 40–39–4 through the 2018 season.

10)  Bowling Green has an enrollment of approximately 14,000 with a graduation rate of 55%.  Notable alumni include Scott Hamilton, Tim Conway and Robert Patrick.