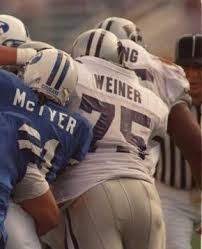 The K-State NFL draft streak continued in 1998 when offensive lineman Todd Weiner was drafted in the second round, number 47 overall, by the Seattle Seahawks.  Todd played four seasons for the Seahawks before being picked up by the Atlanta Falcons, where he played the final seven years of his career.

For his career, Todd played in 152 games, starting 116 of them.  He mostly played right tackle.  The only exception is his final season, when he replaced the Falcons injured starting left tackle in the lineup.

His career stats, according to Pro Football Reference, are below: 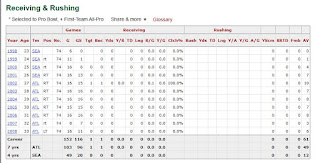 I found an article from 2009 announcing Todd’s retirement from the league.  He received high praise from Falcons coach Mike Smith:

“Todd Weiner epitomizes toughness, grit and everything a championship caliber football player should be,” Falcons coach Mike Smith said. “As good of a player as Todd was for the Falcons, he was an even better person in our community through a variety of highly publicized charitable endeavors working with children. He will be sorely missed by our football team on and off the field, but one thing is for certain — Todd will always be a Falcon.”

It’s hard to find anything online about what Todd is up to now, but I did find a couple videos on YouTube that show him coaching a football team in the Dominican Republic called the Santiago Eagles.

Let me know if you know what Todd’s up to now!