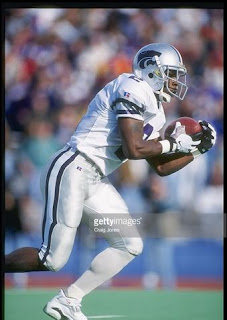 1997 was the fourth year of the draft streak.  K-State had two players drafted in the 1997 NFL draft, defensive back Chris Canty, who declared for the draft after his junior year, and wide receiver Kevin Lockett.

Chris Canty was drafted in the first round, number 29 overall, by the New England Patriots.  He was the first K-Stater to be drafted in the first round since Veryl Switzer in 1954! That’s a 43 year drought!  Chris played four years in the NFL.  He played his first two years for New England, one for the Seattle Seahawks and in his fourth year he split time between the Seahawks and New Orleans Saints.  For his career he played in 61 games, starting 12 of them.  His stats according to Pro Football Reference are below.

Canty was recently named the Patriots biggest draft bust of all time.  Yikes!  I don’t know what Chris is up to now.  There’s not much information about him online. 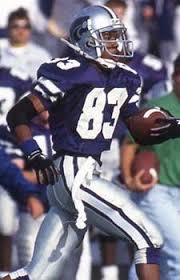 Kevin Lockett will always be remembered as one of the greatest wide receivers in K-State history.  He was drafted in the second round, number 47 overall, in the 1996 NFL Draft by the Kansas City Chiefs.  Kevin had a seven year NFL career and played for multiple teams.  His best season was in 1999 playing for the Chiefs when he had 34 catches for 426 yards and two touchdowns.  He played for the Chiefs from 1997-2000, the Washington Redskins in 2001 into 2002, the Jacksonville Jaguars for part of the 2002 season and the New York Jets in 2003, his final season in the league.

Kevin currently works for Fulcrum Global Capital in the Kansas City area.  His brother, Aaron Lockett, and his son, Tyler Lockett, both played receiver at K-State as well.