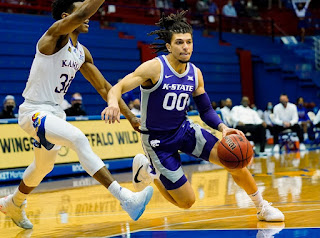 Kansas State wins!  Two in a row!  No, that’s not a misprint!

In what was a surprise to many, Bruce Weber’s Wildcats beat TCU 62-54 on Saturday and followed that up by beating number seven ranked Oklahoma 62-57 on Wednesday night.  Can K-State keep the momentum going?  It’s probably going to depend on the play of senior Mike McGuirl, who has come alive in the last two games.

McGuirl came out on fire at the beginning of the TCU game on Saturday and finished with 16 points, nine rebounds, and five assists.  The Oklahoma game on Wednesday was his senior night celebration. He hasn’t officially announced if he is going to play next year or not, but I guess this is a good sign that he probably is not going to be returning.  He scored 19 points and had seven rebounds.  K-State was down six points with just under four minutes to play when McGuirl hit three-pointers on three straight possessions, helping turn a six-point deficit into a five-point victory.  It was great seeing the senior have such a memorable moment on his senior night.

Are these victories the sign of a turnaround for K-State?  I’m skeptical.  Bruce Weber teams have a history of pulling off upsets against ranked opponents and not following it up with much substance. I joked with some friends a couple of weeks ago that Weber beats a ranked opponent every season no matter how bad his team is and predicted that it was coming.  I thought he was going to find a way to upset Baylor and get a lifetime contract out of it, but I was wrong about that one.  His “ranked team” upset just happened a couple of weeks later. Bruce Weber’s teams have more highs and lows than the future feature film “The Life And Times Of Tiger Woods.”  Here are a few examples of some upsets his teams have had in the past and how they did after pulling those upsets.

Last season they beat number 12 West Virginia only to lose 12 of their next 15 games to finish the season.  They finished with a 3-15 conference record.

In 2018 they beat number four Oklahoma and number 24 TCU back to back and had mixed results the rest of the way.  They went 8-6 after those two victories and finished with a 10-8 conference record.

In 2017 they beat number seven West Virginia and number two Baylor, only go 4-6 down the stretch and finish the conference season 8-10.

In 2016 they beat number one Oklahoma, only to lose seven of their next 10 games and finish the conference season 5-13.

In 2015 they beat number 16 Oklahoma, number 22 Baylor, number 17 Oklahoma, and number eight Kansas.  After beating Kansas they lost two of their final three games to unranked teams and finished the conference season 8-10.

In 2013, Bruce Weber’s first season as coach, he only beat one ranked conference team all season.  Oklahoma State twice.  His team tied for the conference title at 14-4.

What does all this mean?  It means I can’t get too excited about a Bruce Weber team’s victory against a ranked opponent.  They rarely, if ever, follow it up with anything of significance and rarely go on to great things afterward.  These victories are never a sign that the team has finally reached the pinnacle and they rarely continue the ascent.

There is no doubt this team has done some good things in the last week, especially Mike McGuirl.  I’d like to see them continue to improve.  It would be nice to see the program reach some higher highs and to see them get rid of the crater-like lows.  A .500 record should be the minimum this program achieves and consistent winning should be the norm.  I only wish Gene Taylor and Richard Myers agreed with me.