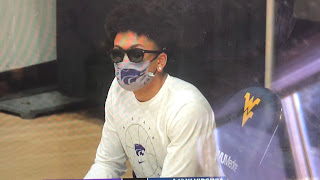 Kansas State basketball lost 65-43 to West Virginia yesterday in a game they were forced to play without starting guard Nijel Pack due to an eye issue. There’s not much to say about this one, as it was ugly on both sides until West Virginia went on a 17-0 run in the second half to break it wide open.  Let’s take a closer look…

JM:  I found this quote interesting because Huggins evaluated both teams as being “miserable.”  He was being honest and he was right, but you usually don’t see coaches evaluate the opposing team negatively like that.

“We don’t have ball handlers and passers…”…Bruce Weber, post-game

JM:  Weber was discussing not having Nijel Pack on the floor and the fact that he doesn’t have any ball handlers and passers when he is not out there.  He also doesn’t have any shooters, but he didn’t mention that.  It’s an indictment of Weber that he pretty much concedes defeat when he doesn’t have Pack out there running things.

“I have had to reinvent our offense at least six times if not more during the season because of different situations.”…Bruce Weber, post-game

“It is hard for the guys because we thought maybe yesterday that we might not have him (Pack), but you are trying to practice early and trying to get here, so how much can you do?”…Bruce Weber, post-game

JM: Let’s see if I’ve got this right.  He was trying to install a new offense in a morning practice prior to flying to Morgantown to play and using that as the excuse why they lost?

“The ball handling is the biggest thing. (Senior guard) Mike (McGuirl) got four (fouls), and he was dead tired, but we still had to keep him in the game at times just because he can pass the basketball and give us a chance.”…Bruce Weber, post-game

JM:  There’s NOBODY else on the roster than can pass the basketball?  Did I read that right?

“K-State is now 7-19 on the season, including 3-14 in Big 12 play… The Wildcats finish the season with a 2-7 mark on the road, all in league play… The 19 losses tie for the third-most in school history.”…kstatesports.com

I think would be best to erase this one from my memory as soon as possible.  Up next is Iowa State in Bramlage next Saturday at 3:00 on ESPN Plus.

Thank God the season’s almost over.  I hear the K-State baseball team is doing well, so I might check that out.  Till next time….