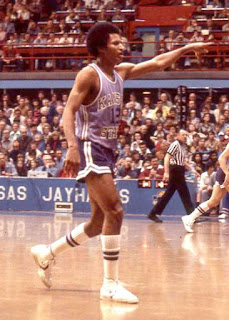 Mike Evans is one of the most prolific scorers in K-State history.  He played from 1974-1978 and ended up as the all-time leading scorer in K-State history until his record was broken by Jacob Pullen.  His jersey was retired in 2006.  Let’s find out a little more about K-State great Mike Evans…

“He remains the only player in K-State history to score 500 or more points in three straight seasons.”…Mack McClure, Manhattan Mercury, March 7th, 2018

JM:  There’s a good trivia question to plant in your memory.

“I have some very fond memories of Kansas State and how we battled Kansas and Missouri for Big Eight Conference titles,” Evans said. “The runs we made in the NCAA tournament always stand out.”…Mack McClure, Manhattan Mercury, March 7th, 2018

JM:  These mid-to-late 70’s K-State teams were very close to going to Final Fours and winning national championships.  Losing to eventual champion Marquette in the second round on a controversial call in 1977, for instance, and taking Syracuse to overtime but losing in the Elite 8 in 1975.

“Evans left for the NBA after his senior season in 1978 as the school’s career scoring leader (2,015 points) despite not having the luxury of the 3-point basket. ‘I was just went out and played and never thought about how many points I was scoring or anything like that,’ said Evans, who played for four NBA teams, after being selected as the 21st pick in the first round of the 1978 NBA draft by the Denver Nuggets. ‘I never gave much thought about it.”’…Mack McClure, Manhattan Mercury, March 7th, 2018

JM: A scoring machine who never had the thought “I’m going to go out and score a bunch tonight” on his mind.  It just came naturally in the flow of the game.  That’s big time.

“He became a member of the Nuggets’ coaching staff after his playing days ended, and took over the remainder of the 2001-02 season as the interim coach when Dan Issel was fired. Evans also was an assistant coach and scout for the Toronto Raptors from 2006 to 2009.”…Mack McClure, Manhattan Mercury, March 7th, 2018

JM: Mike has been in the NBA off and on as a coach and scout since his playing days ended.  Interesting that he was interim coach of the Nuggets for a while.

“Evans made 49.1 percent of his field goals, estimating that nearly half of his shots came from 20 feet or deeper”.…Mack McClure, Manhattan Mercury, March 7th, 2018

JM:  He shot 49.1 percent from the field with half of his shots coming from 20 feet or deeper?  Awesome.

JM: “I think I’ll just go out and score 30 points in my college basketball debut.  No biggie!”

“‘They quickly became known as “The Purple Pop Guns,” for their long-range proficiency. ‘There were times when both of us would be pulling up to shoot a few steps inside the half-court line,’ Evans said. ‘Coach Jack Hartman gave us the freedom to do that. We didn’t have a line.”’

JM:  Evans and Chuckie Williams made up one of the best college basketball back courts in the country.

“As the masked marvel, Evans teamed up Williams to lead K-State to the Elite Eight in 1975, where it lost to Syracuse in overtime, 97-85.”…Mack McClure, Manhattan Mercury, March 7th, 2018

JM:  Evans suffered a broken nose during his freshman season and had to wear a face mask, earning him the “masked marvel” nickname.  Another Final Four was within reach that season against Syracuse in the Elite 8 of the NCAA tournament, which saw K-State losing in overtime.

“After beating Providence in an opening-round game of the NCAA Tournament in a regional in Oklahoma City, K-State lost to eventual national champion Marquette, 67-66, after a late controversial tip-in and three-point play opportunity by Daryl Winston was wiped out.”…Mack McClure, Manhattan Mercury, March 7th, 2018

JM:  This close, and very controversial, call was interesting to read about.  You can read the details here, if interested.  Free subscription to the Manhattan Mercury is required.

“And when the starting lineups were introduced, chickens descended from the stands onto the playing surface, courtesy of K-State fans. ‘Those were the most memorable, positive memories,’ Evans said, ‘and I thought it was great when the chickens came flying out of the stands,”’…Mack McClure, Manhattan Mercury, March 7th, 2018

JM:  I think it’s safe to say Mike is not a card carrying member of PETA.  The legend of the live chickens goes back a while and is in reference to K-State fans calling KU the “Chickenhawks.”

“He told me that it went back to when I was at Laurinburg Prep. He came up to me and offered me an opportunity to go to the University of North Carolina. I was really happy, ecstatic about the opportunity, but then he told me he couldn’t give me a scholarship. It kind of cut the legs from under me. He said, ‘It’s not that I don’t want to. I promised one of my point guards that I wouldn’t recruit another player at that position.’ He said, ‘After you said you couldn’t do that, (walk on), I went to a coaches meeting with Jack Hartman and Bill Guthridge,’ who went to school here. Dean went to the University of Kansas. They were sitting and talking, he and Jack Hartman, and he asked Jack how his recruiting was going. Jack told him that he felt good about his frontcourt, but he had lost Lon Kruger and Danny Beard, and he wasn’t too happy about his point guard situation. Dean Smith said, ‘Well, you need to go and check out the kid, Evans, at Laurinburg.’ Chuck Garrett, who was the assistant coach, great man, flew in and brought me out here. I fell in love with the place and signed, and that’s how I got here. “…Mike Evans, www.kstatesports.com, January 25th, 2019
JM: Those are some all-time great basketball legends talking about Mike Evans.  Very interesting story about how he ended up at Kansas State.
“A member of K-State All-Century Team, Evans was inducted into the Kansas State Sports Hall of Fame in 1998.”…Kansas Hall of Fame
JM:  Evans is joined by Ernie Barrett, Rolando Blackman, Bob Boozer, Lon Kruger, Steve Henson, Ed Nealy, Jack Paar, Mitch Richmond and Chuckie Williams on the K-State All-Century team voted on by the fans.

“Perhaps no Nuggets player in the 1980s defined mental toughness and determination more thoroughly than Mike Evans. An All-American basketball player at Kansas State, Evans was drafted by the Nuggets in 1978, but was dealt on draft night and did not begin his playing career until 1979. The Nuggets re-acquired Evans on Jan. 12, 1983, signing him as a free agent – and Evans quickly became an integral cog on some of the most successful teams in Nuggets history. The Nuggets were in the playoffs in all of his six seasons with the team.”…Christopher Dempsey, NBA.com, January 11, 2018

“To wit: On March 1, in the 1985 season that ended with the Nuggets in the Western Conference Finals, the team needed someone – anyone – to step up and help in a game that was getting away from them. They were down by 23 points in the game. Alex English and Calvin Natt were doing their thing, but they needed help.

He scored a career-high 38 points that night, knocking down 5-of-7 3-pointers in the process in an unforgettable performance off the bench. With Evans knocking down every shot in sight – he was 15-of-20 that night – the Nuggets were off and running. They reeled in the Mavericks and then won the game 141-140 in overtime. Evans also had eight assists in the game.”…Christopher Dempsey, NBA.com, January 11, 2018

JM: This was an article posted on NBA.com discussing the 1980’s Denver Nuggets.  The moment described seems to be the highlight of Evans’ NBA career and is remembered fondly by Nuggets fans. I found some Mike Evans Nuggets highlights in a Facebook video here.  Check it out!

Thanks for reading.  Do me a favor and share this with any K-State fans that you know.  Thanks!