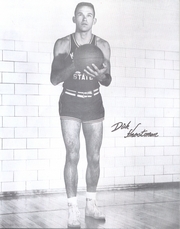 When looking at the list of jerseys that K-State has retired, Dick Knostman was the one name that I honestly had never heard of and didn’t really know anything about.  It was fun learning a little bit about him when researching for this blog post.  Here we go!
“Twice selected an All-American at Kansas State University, Richard William Knostman was one of the greatest players ever to wear the purple and white of the Wildcats. Knostman was a three-year lettermen for head coach Jack Gardner from 1950-1953 and helped lead the Wildcats to a 61-13 record, including three consecutive Top 10 national rankings and a second-place finish in the 1951 NCAA Tournament.”…Kansas Sports Hall of Fame
JM: Knostman was inducted into the Kansas Sports Hall of Fame in 2008.  They say he is “one of the best players to wear the purple and white?”  I need video!
“Knostman was an all-state basketball player for Wamego High School in 1949 and scored 42 points in one game in 1948 before going on to play at Kansas State University.”…Kansas Sports Hall of Fame
JM:  The pride of Wamego!  Kind of neat that he’s a local and had as much success as he did.
“Fifty years after playing at K-State, Knostman still ranked among the top 5 in 17 single-game, season or career categories. Knostman averaged a double-double for his career – 14.6 points and 10.5 rebounds in 74 games. He became the second K-State player ever drafted in 1953 when he was selected by the Syracuse Nationals of the NBA.”….Kansas Sports Hall of Fame
JM: Knostman only played one season for the Nationals, seeing action in five games.  Here’s a trivia question for you.  Who’s the FIRST K-State player ever drafted?
“Knostman, a 6’6 center from Warnego, Kansas, played basketball at Kansas State where he helped the Wildcats to the 1951 Final Four as a sophomore.”…PeachBasketSociety
JM:  Knostman was the center on the 1951 K-State Final Four team.  K-State great Ernie Barrett was also on that team.
I was unable to find much else on Dick Knostman, but his acceptance speech to the Kansas Sports Hall of Fame is online and is worth the watch.