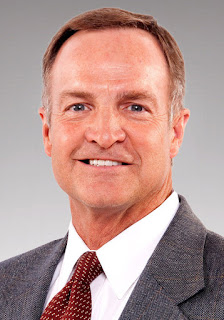 I learned a lot about Lon Kruger when doing research for this blog post.  Kruger is one of the most well known K-State alumni because of his long coaching career after his playing days.  Let’s dig right in….
“A two-time Big-8 Conference basketball Player-of-the-Year at Kansas State University, and the Big-8’s all-time “Mr. Hustle” honoree, Lon Kruger of Silver Lake is considered one of the greatest players in K-State and league history.”…Kansas Sports Hall of Fame
JM:  Kruger was inducted into the Kansas Sports Hall of Fame in 1999.  His K-State jersey was retired in 2006.
“As a prep senior at Silver Lake, he averaged 23 points per game in leading the Eagles to the state tournament, passed for 2,079 yards and 23 TDs as a quarterback and led his baseball team to the state tourney. Drafted by the Houston Astros out of high school, Kruger opted to play basketball at K-State where he signed as Coach Jack Hartman’s first recruit.”…Kansas Sports Hall of Fame
JM:  Silver Lake, Kansas, where Kruger is from, is a small town of around 1,500 people outside of Topeka.  He could have played baseball out of high school but opted to become Jack Hartman’s first recruit.  Interesting.
“Kruger instantly emerged as the team leader, earning Big-8 Sophomore-of-the-Year honors in helping KSU to two Big-8 titles and three NCAA tournaments. Kruger scored 1,063 career points including 17.6 per game as a senior. He shot 82.6 percent from the foul line, but was best-known as the “coach on the floor” as he directed K-State’s offense from his point guard position.”…Kansas Sports Hall of Fame
JM:  Kruger was also named Big 8 player of the year in 1972-73 and 1973-74.  The only other players to win the Big 8 player of the year award twice?  Bob Boozer, Mike Evans, Dave Robisch (KU), Wayman Tisdale (OU), Danny Manning (KU), and Doug Smith (MU).
“Following graduation, Kruger was drafted by both the NBA’s Atlanta Hawks and Major League Baseball’s St. Louis Cardinals.  He played professional basketball in Israel from 1974 to 1975.”…Kstatesports.com
JM:  How would history have changed if Kruger had gone off to play baseball instead of basketball?  I find it interesting that the choices these athletes make can have a major impact one way or another on the future of sports programs.
“Kruger moved into the coaching ranks at Pittsburg (Kan.) State in 1976 before becoming an assistant coach at his alma mater under Hartman in 1977.  He helped the Wildcats to a 103-49 (.678) record from 1977-82, including three NCAA Tournament appearances and the 1980 Big Eight Tournament Championship.  He left to become head coach and athletics director at Texas-Pan American in 1982, guiding the Broncs to a 52-59 record from 1982-86.”…Kstatesports.com
JM:  Kruger is the definition of a “job jumper.”  Even though it seems he has found a permanent home as head coach at Oklahoma, he has jumped around as much or more than any coach out there.  He has coached at six different college programs, has coached the Atlanta Hawks in the NBA, and served as an assistant coach one year for the New York Knicks.
“Following the retirement of Hartman, Kruger was named head coach at Kansas State in the spring of 1986.  In leading the Wildcats to an 81-47 (.633) record, he became the first head coach in school history to guide four consecutive teams to the NCAA Tournament.  His regular season conference winning percentage (34-22; .607) ranks fifth all-time among Big Eight Conference coaches, while his victory total ranks sixth among coaches in Kansas State history.”…Kstatesports.com
JM:  Kruger left K-State in 1990 to become head coach at Florida.  He took Florida to one Final 4 during his tenure.  I often wonder what would have happened if he had stayed at K-state.  He could have been a lifer in Manhattan as head coach, but it’s obviously not in his DNA to stay anywhere for too long.
“Certainly money is always a factor and Florida came along.”…Lon Kruger in an interview with Seth Davis, Feb 2, 2017
JM: Kruger cited a couple factors for leaving K-State, but this was a big one.  Florida offered him a salary of $110,000 a year, which was $30,000 a year more than he was making at K-State.  Doesn’t seem like a huge amount to make a move like that.  You can watch the short video clip of the interview here:

“In four seasons, he led K-State to an 81-46 record and took the Wildcats to the NCAA tournament all four years, the only coach in K-State history to achieve the feat of four straight tourney berths.”….Bleacher Report, June 4th, 2014
JM:  Bleacher Report ranked Kruger as the 4th best coach in K-State history, behind Jack Gardner, Jack Hartman and Tex Winter.
“Kruger and his superstar, Hield, the best player he has ever coached in college, have created a cool, rare combo: They’ve both been Player of the Year in the Big 12/Big 8 — twice. In back-to-back years. A two-time conference Player of the Year has never coached a two-time conference Player of the Year at the major conference level, and as far as what I researched, has never happened before in Division I.”…Matt Norlander, CBS Sports, April 1, 2016
JM:  Kruger has coached some NBA talent over the years, including Buddy Hield, Trae Young and Mitch Richmond.  He has taken both Florida and Oklahoma to the Final 4, but interestingly has only won his conference twice, tying for first with Florida in 1993-4 and tying for first with Illinois in 1997-8.
“From 1956-77, Kansas State won 12 regular-season conference titles. Kruger was part of the last freshman class, in 1970, that didn’t have eligibility to play on varsity. His four-man class, which included Beard, Larry Williams and Gene McVey, became known locally as the ‘Fab Four.'”…Matt Norlander, CBS Sports, April 1, 2016
JM:  This is the first I’ve ever heard of the “Fab Four.”  A Google search of the “Fab Four” brings up results of a Beatles tribute band, so that’s not much help.  K-State’s “Fab Four” won the conference twice and went to two Elite 8’s.  Here’s a pic of the “Fab Four” with Jack Hartman. 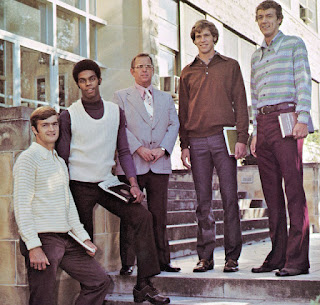