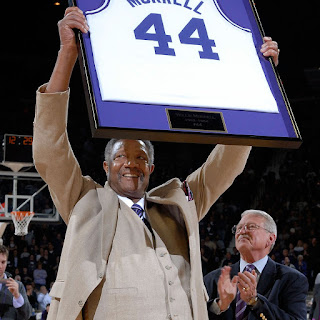 Sometimes when I’m in Bramlage Coliseum and look up in the rafters at the Final Four banners and retired jerseys certain banners will stick out because not only do I not recall those years, but I don’t really know much about the players on those teams.  Willie Murrell is one of those players that K-Staters don’t talk much about, so I was looking forward to putting this blog post together to learn a little bit more about Willie.  I learned a lot and hope you enjoy this blog post about Willie Murrell.
“One of just 11 players to earn first team All-America honors, Murrell was a two-year letterman for head coach Fred “Tex” Winter from 1962-64 after transferring from Eastern Oklahoma A&M. He guided the Wildcats to a 38-16 overall record, including a pair of Big Eight Conference titles and a Final Four appearance in 1964.”…www.kstatesports.com, December 20, 2018
JM:  Willie played for K-State for two years.  K-State won the conference twice and went to a Final Four during those two years.
“Murrell earned 25.3 points during the run to the Final Four, including a 29-point, 13-rebound effort in the semifinals against UCLA en route to earning recognition to the All-Midwest Regional Tournament team and the All-Final Four squad. He is the only player to ever record a double-double in a Final Four game and the only one selected to an All-Final Four team. His 29 points against the Bruins are the most by a Wildcat in a Final Four game.”…www.kstatesports.com, December 20, 2018
JM:  Willie remains the only K-State player to make an all-Final Four team.  He definitely carried the team to the Final Four in 1964 as the star player on the team.

“Murrell, from the small town of Taft, Oklahoma, was hardly a “no-name” player when he arrived at K-State.  Already a two-time Junior College All-American at Eastern Oklahoma A&M and the National Juco Tournament MVP, the six foot, six inch Murrell was a coach’s dream of pure, unfettered athleticism.”…Kansas Sports Hall of Fame

JM:  Willie was the best Juco player in the country.  Quite a get for Tex Winter.

“Known in junior college as the “Scoring Artist,” Murrell struggled in his first few games after transferring into Winter’s structured triangle offense, but he quickly adapted his game and learned to play within the system.  Despite his slow start, he averaged 18.6 points and 10.2 rebounds per contest during his first season, leading the team in both categories.  He also led the Wildcats to a 1963 Big Eight conference title and was a first team All-Conference selection.”…Kansas Sports Hall of Fame
JM:  The “scoring artist?”  This nickname alone prompted me to really dig in to see if I could find some video highlights.  I found the short clip below showing Willie hitting a couple of sky hook shots, one with each hand.  Unfortunately that’s all I can find.
“Murrell’s junior season set up the Wildcats for an historic run the following year.  Not expected to be much of a force on the national stage, the Wildcats reeled off eleven straight wins to end the regular season and won another league title.  Once again, he averaged a double-double for the season with 22.3 points and 11.1 rebounds per game and earned All-Conference honors.”…Kansas Sports Hall of Fame
JM:  Nowadays Juco players come in and typically make little to no impact.  Willie Murrell came right in and kicked ass.
“Kansas State def. Texas Western (64-60)

-The Big Eight champions were led by Tex Winter, who would gain fame as Phil Jackson’s right-hand man in winning 11 NBA championships between the Bulls and Lakers. This was the most legendary run in K-State hoops history, as they were in a streak of seven NCAA Tournaments in nine seasons.

In this particular game, future NBAer Willie Murrell dropped in 24 points and had 11 rebounds while Roger Suttner added 16 and 14 in the victory. Charlie Banks topped Texas Western with 20 points while Jim Barnes was held to just four points on five shots before fouling out.”…Derek Martin, www.kmaland.com, April 13, 2020

JM: This was in a write-up I found online discussing the 1964 NCAA tournament.

-This wouldn’t be the first Kansas State Final Four team, but it is the last. They also went in 1948, 1951 and 1958, and this particular qualification was despite a monster game from Stallworth, who had 37 points and 16 rebounds.

Willie Murrell had 28 points and 10 rebounds for the Wildcats, sending Tex Winter to another Final Four and Ralph Miller to Iowa.”…Derek Martin, www.kmaland.com, April 13, 2020

“The Final Four was played in Kansas City at the Municipal Auditorium for the ninth and final time. Kemper Arena got the next one in Kansas City (1988), and they haven’t returned since. They should return.

“Murrell was chosen in the fourth round of the NBA Draft by the old St. Louis Hawks, but he opted to play in the new American Basketball Association. Over three seasons with the Denver Rockets, Miami Floridians and Kentucky Colonels, Murrell averaged 13.1 points and 7.3 rebounds.”…Scott Munn, The Oklahoman, February 19, 2019
JM:  Willie played three years in the ABA, but his basketball career wasn’t quite over…
“He later played with the Harlem Globetrotters..”…https://www.okhighered.org, March25, 2009
JM:  Willie was inducted into the national junior college hall of fame in 2009.  His K-State jersey was also retired in 2009.  He was inducted into the Kansas Sports Hall of Fame in 2012.  I found this throwaway line about the Harlem Globetrotters at the very end of the write up about his junior college hall of fame induction.  I can’t find any other information about his time with the Globetrotters.  The Globetrotters have a list on their website of all the players that played for the Globetrotters and Willie is not on the list.  Weird.
Here’s a picture of the 1964 K-State Final Four team.  56 years ago. 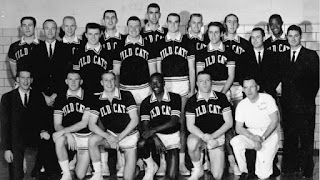