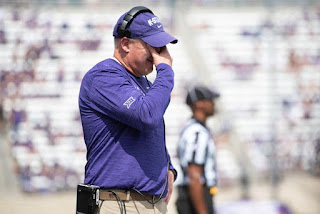 The football Wildcats were embarrassed by the Texas Longhorns in their regular season finale yesterday, losing 69-31 and falling to 4-6 on the season.  It wasn’t a good day to be a K-State fan, as the basketball Wildcats, now 1-3 on the season, lost 68-58 to previously winless UNLV.  There’s not much to be excited about with either program right now.

JM:  I think Klieman says this after every loss.  He’s turning into Andy Reid with the robotic post-game press conference comments.

“One of the most frustrating parts was that they had key offensive lineman that weren’t in the game, and the defensive line was excited to take advantage of the opportunity with how disruptive we’ve been playing.. But they definitely schemed our defensive line super well.”…Wyatt Hubert, post-game

JM:  I thought the same thing going into the game, but I was as wrong as Hubert.  Texas dominated offensively and did whatever they wanted all game long. racking up 608 total yards.  Vegas was very wrong in this one as well.  Texas was a seven point favorite going into the game, way off the 38 point final outcome.

“We couldn’t stop them (and) we ran out of players. All of that being said, give Texas credit. That running back (Robinson) is a great player. That quarterback, in my mind, is the best quarterback in the league. They’re really big up front, and we didn’t do a good enough job of stopping them. We have to get bigger. We have to get stronger. We have to get heavier. We have to do all those things, because we were mismatched today.”…Chris Klieman, post-game

JM:  All of this is true, however every team in the country is dealing with Covid.  I believe Texas had three players declare for the draft prior to the game that didn’t even play.  I appreciate the honesty in saying they have to get bigger, stronger and heavier, but this is the same thing Ron Prince said after every blowout loss in 2007 and 2008.  Recruiting has gotten better under Klieman, but it’s going to have to get a LOT better.

JM.  K-State finished the game with 448 yards, but Texas gives up 409.8 yards a game on average and the Wildcats were playing from behind all game.  Deuce Vaughn and Malik Knowles were two of the bright spots for K-State.

“Running back Deuce Vaughn rushed for 125 yards and two touchdowns on 10 carries, breaking the school freshman rushing record with 696 yards for the season. His 221 all-purpose yards — he added 45 on four catches and returned a pair of kickoffs for 51 — put him just two short of Robinson’s 223.”…Arne Green, Topeka Capital Journal

JM: Deuce was fun to watch in this one, with a couple of great touchdown runs.  You can view one of them here.

The 69 points by the Longhorns was the fifth most given up by a K-State defense in program history. The Wildcats also gave up seven rushing touchdowns, the most since the Bill Snyder-coached Wildcats gave up eight to Colorado in 1989.  K-State fans are all over the map expressing what they think about this.  Some fans are concerned and another large group of fans is the “this season doesn’t matter anyway because of Covid” crowd that I vehemently disagree with.  Every program has had to deal with Covid issues this fall.  If the season is just a “throwaway” season, then why even play it?  When the team was 4-1, these same fans were excited that K-State was playing well and was in contention for the Big 12 title.  You can’t have it both ways.

To say I’m concerned about the Wildcats going into next season would be an understatement.  As Klieman said, the team needs to get bigger, stronger and heavier.  I’d also add that they have to get faster at certain positions, especially wide receiver.  I don’t know if they can do it or not.  I’m not a fan of either the offense or the defense right now and both coordinators should be on the hot seat.  Both the offense and defense are eighth in the league in both scoring and total offense and scoring and total defense. That’s not going to get it done in the Big 12.  Fans should consider that unacceptable, Covid or not.  The feeling I get from the fan base is that of apathy and/or patience, which is not a good sign.  This program cannot afford to take another step backward next season.