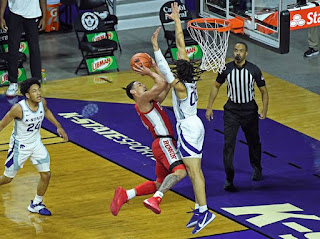 K-State basketball has started the season 1-3, their lone win a four point victory over perennial loser Kansas City.  They’ve lost their three games by an average of 13 points.  This season could end up being historically bad for the basketball Wildcats.  It hasn’t been pretty, but let’s review what has happened so far this season….

“I knew it was going to be a difficult game for us. They’re a veteran team.”…Bruce Weber, Drake post-game, November 25th

JM:  Weber made this comment after losing to Drake 80-70 to open the season.  I went and looked at the Drake basketball media guide.  They have five newcomers this season and are led in points by a junior and led in rebounds by another junior.  I don’t really care to investigate further.  Guess I’ll take Bruce’s word for it.

“They made all the big plays down the stretch to solidify it. We gave up too many points.”…Bruce Weber, post-game, November 25th

“It was disappointing. I think it was maybe a three-point game, and they had a little drop down to the big guy ‘Foul the guy! At least contest him!’ And we didn’t even contest him. We got lost sometimes and (Drake) made the right reads.”…Bruce Weber, post-game, November 25th

“With a young team (and) not an experienced team the thinking probably cost us.”…Bruce Weber, post-game, November 25th

JM:  One game, one excuse that he has a young team.

“Obviously I was pleased with the energy (and) the effort, especially at the start of the game, the first half. If we would have had that energy and effort against Drake, I totally believe the outcome would have been different. That’s part of dealing with a young team trying to be patient.”…Bruce Weber, Colorado post-game, November 27

JM:  K-State led by one point at halftime against Colorado.  They collapsed in the second half, losing by 18.  Two losses, two “young team” excuses.

“I thought Antonio and DaJuan gave us great effort. Obviously DaJuan’s overall line is really good. Antonio had three blocks, made some really nice plays, plus-12 on the plus/minus and he led us on the ‘play-hard’ chart.”…Bruce Weber, Kansas City post-game, November 30

JM:  K-State led 17-0 in this one, but slowly let Kansas City (formerly UMKC) back in the game and held on for a four point victory.  One victory, one mention of the play-hard chart.

“I appreciated the win. We had to start a win streak. You have to win one to get to two, and now we’ve got a chance Saturday night to get to two.”…Bruce Weber, Kansas City post-game, November 30

“I thought we should have been in the lead at halftime,” he said, noting he asked his players to raise their hands if they missed a layup in the opening 20 minutes. “And about five raised their hands.”…Ryan Black, Manhattan Mercury, December 5

JM:  K-State was down one point to winless UNLV at halftime.  Apparently K-State is good at one thing.  Missing layups.

“After returning to the floor, UNLV played at a higher clip, extending its lead to 11 (52-41) with 11:32 to play. But the Wildcats clawed back within three, 56-53, following a pair of free throws from McGuirl with only 5:55 to go. It was all Rebels the rest of the way, though, as they outscored the Wildcats 12-5 in the final five minutes.”…Ryan Black, Manhattan Mercury, December 5

This is going to be a long season for the basketball team and the fans watching the team.  It has been ugly so far.  Really ugly.  I find it mostly painful to watch K-State basketball.  I have enjoyed college basketball season since I was a young kid and I started closely following K-State in 1991 when Dana Altman was the coach.  I lived through the Asbury and Wooldridge years and was rejuvenated when Bob Huggins was hired and Frank Martin took over.  Bruce Weber has given us a roller coaster ride and mediocrity reigns when you look at his overall record.  I don’t enjoy watching these rebuilding seasons with the same excuses given loss after loss. I’ll never understand why the lows have to be this low or why there are even lows at all.  This is something the fan base is split on.  There are some fans that love Weber and some that want to see him move on.  I wish we had a more consistent basketball program that competes near the top of the league year after year.  Is that too much to ask?  It shouldn’t be.