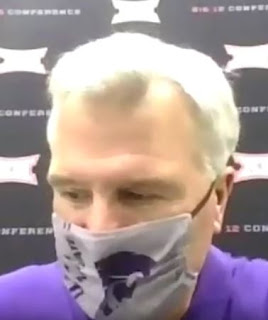 The K-State basketball team followed up their 82-67 loss on Saturday with a 76-50 loss to Oklahoma in Norman last night.  They’ve lost five games in a row by an average of 15 points.  The closest they’ve come to winning was a seven point loss to TCU on January 2nd.  It’s not going to get any easier with games against West Virginia, Baylor, Texas A&M and Kansas coming up.  Yikes.

JM:  This is how Bruce Weber started out his post-game press conference last night. He answered some questions from reporters and the only solution Bruce seemed to have to fix things is eventually getting Nijel Pack back in the lineup.  Turning this debacle of a season around does not sound promising.

JM:  What is the deal with these huge runs that the Wildcats give up in what seems like every game?  Against Texas it was an 18-0 run.  Oklahoma had a 13-0 run in the first half and a 12-0 run in the second half. This continues to be an issue.

“K-State moved closer to having a fully healthy roster with the return of (Kaosi) Ezeagu, who played 12 minutes in his first game since December 5. The Wildcats played with 12 of their 14 roster players after getting back Antonio Gordon and freshmen Luke Kasubke and Seryee Lewis against Texas on Saturday.”…www.kstatesports.com, January 19th

JM:   At least the Wildcats are almost at full strength.  But will it matter?

“DaJuan Gordon scored a team-high 13 points on 6-of-14 field goals to go with 6 rebounds and 2 steals in 33 minutes. He has now scored in double figures in 9 games, including fifth time in the last 7 games.”...www.kstatesports.com, January 19th

JM:  DaJuan Gordon continues his solid play, but it’s getting lost because of all the losses piling up.

“Kansas State true freshman Deuce Vaughn picked up yet another postseason accolade as he was named the all-purpose player on the 2020 Football Writers Association of America (FWAA) Freshman All-America Team, the organization announced Monday.”...www.kstatesports.com, January 18th