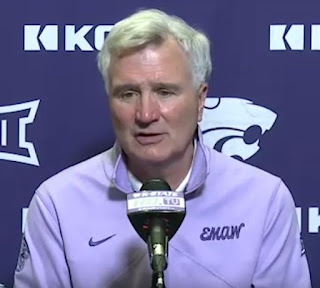 “A week ago Tuesday, it was not a very good day. They came together. I told Wyatt (Thompson) and the radio people on the pregame (show) that if going through the loss last week brings our team together, I’ll take all the criticism. I’ll take all the gruff. It doesn’t matter. I think it brought those guys together.”…Bruce Weber, Iowa State post-game, December 15

JM:  K-State beat Iowa State in Ames 75-64 on Tuesday.  It was an ugly game.  I don’t recall watching an Iowa State basketball team play so poorly and I found myself distracted on Twitter while the game was going on.  Watching two horrible basketball teams, even though one of them is “my” team, doesn’t really keep my interest.  Bruce said in the quote above that he thought the Fort Hays State loss brought the team together.  Yesterday proved that the comments were just fluff.

“Normally in a Big 12 game if you score 69 that gives you a chance.”…Bruce Weber, Baylor post-game, December 19

JM:  Way to put a positive spin on a 31-point loss to Baylor in Bramlage Coliseum.  Baylor beat K-State 100-69 yesterday.  The Bears averaged 1.47 points per possession in doing just about anything they wanted to do against the Wildcats.

“There’s not much you can say. They just kicked our butt … They are scary good.”…Bruce Weber, Baylor post-game, December 19

JM:  Weber raved about Baylor’s talent and how well they played.  You can watch it here.   I’d like to be the team and program talked about like that instead of being the team getting our “butts kicked.”

“…we have a lot of young guys…”…Bruce Weber, Baylor post-game, December 19

JM:  Five losses.  Five “we are young” excuses after the games.

“I believe in Coach Klieman and what we are doing here, and I want to be a part of it. Kansas State University means a lot to me and I am ready to give it my all for one more season in front of the greatest fans in the country.  See you in September.”…K-State quarterback Skylar Thompson, Twitter, December 20

JM:  Skylar Thompson announced on Twitter that he will be returning for the 2021 football season.  This is great news.  Incoming freshman Jake Rubley probably needs some time to adjust to the college game and won’t be ready to start right away, so Thompson returning is the best case scenario for K-State football.  The status of Will Howard remains up in the air.  I’m not sure what he will do.  Backup quarterback Nick Ast announced earlier this week that he is transferring.  I’m glad to hear the news about Thompson after a depressing couple of weeks in K-State sports.