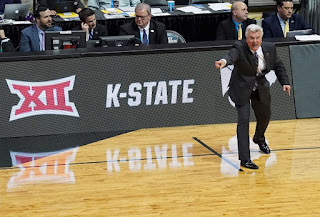 When someone asks me for my prediction before a K-State basketball game, I think of one of my favorite movie scenes from Rocky 3.  In this particular scene, Clubber Lang, played by Mr. T, is being interviewed prior to his championship fight with Rocky. The interviewer asks, “What’s your prediction for the fight?”  Lang says, “Prediction?”  He then looks directly at the camera and says, “PAIN.”

It’s often painful watching K-State basketball under Bruce Weber, but it’s been especially painful this season.  The Wildcats have gotten off to a 2-4 start, including a horrifyingly bad 13-point loss to division two Fort Hays State, who was playing without their head coach and number one assistant coach due to Covid. “K-State” was trending on Twitter after the game that night for all the wrong reasons.

The K-State basketball team hasn’t started a season 1-4 since the 1965-66 season when Lyndon Johnson was President of the United States and Tex Winter was K-State’s head basketball coach.  They haven’t lost to a smaller, lower level in-state school since 1945 when Harry Truman was President and World War 2 was just wrapping up.  The Wildcats lost 20 games in 1945, which was a school record until last season’s 21 losses.  This year’s team may just break another record for futility.

It’s an ongoing joke among K-State fans that Bruce Weber says the same thing to the media after each loss, most of the time saying that he has a very young and inexperienced team.  He does have a young and inexperienced team this year, but it’s not due to things out of his control.  This is his second rebuilding job in his eight years as K-State coach.  Losing most of the roster due to transfers and graduations and not being able to maintain a consistent program has been a recurring problem for Weber.  Being young and inexperienced may be an excuse for playing poorly in stretches, but it isn’t an excuse for losing to a division two school.  Here’s a sampling of Weber’s comments after each loss…

After an 80-70 loss to Drake to open the season:  “With a young team (and) not an experienced team the thinking probably cost us.”

After a 76-58 loss to Colorado:  “Obviously I was pleased with the energy (and) the effort, especially at the start of the game, the first half. If we would have had that energy and effort against Drake, I totally believe the outcome would have been different. That’s part of dealing with a young team trying to be patient.”

After a 68-58 loss to UNLV:  “Obviously experience will help over time.”

After an 81-68 loss to Fort Hays State:  “I apologize. I am disappointed. No excuses, I am the boss and I have been here. I have done really good things, but right now this is not a special thing. I hope (the fans) stick with us. We have got a young group. I am very, very sure on Friday (against Milwaukee) that it is going to be different, and hopefully moving forward in the season.”

And for good measure, after the close victory over Milwaukee: “Just really happy for our players. Obviously, the last two games have been difficult. We’ve got such a young group.”

We get it.  The roster is young and inexperienced.  The excuses ring hollow at this point.  K-State fans want to see progress and wins.  The time for patience is over.  Bruce Weber took over as K-State basketball coach in 2012.  At the time, current Illinois coach Brad Underwood was a candidate for the job and got a courtesy interview but athletic director John Currie offered the position to Weber.  In Weber’s first year, he tied for the league title, a feat he repeated in 2018-19.  In neither of those years would anyone argue that K-State had the best team in the Big 12, but tying for the league title was something K-State fans hadn’t seen in a while.  While he has had some success, there have been some deep valleys.  He’s had conference records of 5-13 (2015-16) and 3-15 (2019-20).  Weber’s overall conference record is 72-72.  That’s the definition of mediocrity.

Bruce Weber has made five NCAA tournaments as K-State head coach and has lost in the first round four of those five times.  The only exception was the improbable Elite 8 run in 2018.  Last year he set a school record for losses, a record that his team might break this season.  It’s been tough watching K-State alum Brad Underwood have success at Stephen F Austin, Oklahoma State, and now at Illinois.  Illinois was ranked number six in the country prior to their loss to Missouri over the weekend.  I often wonder, “what could have been” had Brad Underwood been given the head coaching job instead of Bruce Weber.  Unfortunately, we’ll never know.

I don’t see another Big 12 Championship in the cards for The Bruce Weber-led Wildcats.  This team and program have a long way to go.  The current roster is the same group of players he usually has: some average Big 12 talent along with a bunch of role players that will probably transfer out of the program eventually and will be replaced with other role players.  Weber will find a way to win some Big 12 games as he always does, but there will also be the usual head-scratching losses.  Is being “average” good enough for K-State fans or is there a craving for more success than we’ve seen?  That’s a hard question to answer right now.  Weber has his detractors, but he also has plenty of supporters.  Among the most important of his supporters are University President Richard Myers and athletic director Gene Taylor.

It’s frustrating to watch this team knowing that a significant portion of the fan base is completely fine with these types of performances from the basketball program. College basketball is my second favorite sport (after college football) and a lot of the enjoyment for the sport has been sucked out of me watching this basketball team over the past two years.

So what is my prediction for K-State basketball in the Big 12 this season?  In the famous words of Clubber Lang:  PAIN.