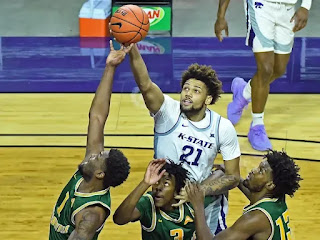 A 24 point victory over the Jacksonville Dolphins on Monday was exactly what the K-State basketball players and coaches needed going into the Christmas break, but the fan base is still not impressed.  There has been some more football news in the last few days, so let’s take a look at everything that’s happening with K-State athletics….

“After a series of double-digit losses and narrow victories to start the season, the Wildcats put it all together — or at least enough so to handle a weary and overmatched Jacksonville team — Monday afternoon, cruising to a 70-46 victory over the Dolphins at Bramlage Coliseum.”…Arne Green, Topeka Capitol Journal, December 21.

JM:  A win is a win, so there is little to complain about.  I found myself very bored watching this game.  Jacksonville was easily over-matched and never had a chance to be competitive in this one.  This was more like an exhibition game.  And why exactly was it scheduled for 1:00 on a Monday afternoon on ESPN Plus?  I’d like to know how few people logged in to watch.  The arena was more empty than “Covid-empty.”  I found myself thinking “this is what K-State basketball is reduced to?”  They played at 1:00 on a Monday broadcast on a streaming platform because nobody in the athletic department or the basketball program or any fans care enough that they couldn’t watch.

“It felt great, being able to rest a bit, being able to get our (walk-on) guys in — Joey (Petrakis) and Drew (Honas) and this is exciting to be able to end our little side of the season going into Christmas break with a big win.”…Nigel Pack, Jacksonville Post-game, December 21

JM:  Pack led all scorers with 16 points.  So far, Pack has performed pretty well in the non-conference games but has not performed well in the two Big 12 games the Wildcats have had.

“I’ve been in a shooting slump. This isn’t my first time being in it. You’ve just got to keep shooting and they’ll start falling. I’ve been in the gym with the coaches and even my teammates, they’ve been helping me out.”…DaJuan Gordon, Jacksonville post-game, December 21

JM:  Gordon had the first double-double of his career, with 13 points and 12 rebounds.  One thing I’ve definitely noticed is he’s going to keep shooting it and has the green light from the coaching staff to do so.

“We made some progress. Obviously, you’ve got some time. They’re going home and then on the 29th we play Omaha. Then into the league. Hope they can get a chance to go home and enjoy their families. I really hope they stay COVID free.”…Bruce Weber, Jacksonville post-game, December 21

JM:  Covid is still going around and will be for the foreseeable future.  It hasn’t really hit the Wildcat basketball team yet.  Hope it stays that way.

“The postseason honors continued on Tuesday for Kansas State running back Deuce Vaughn as he was named a First Team Freshman All-American by The Athletic, the publication announced. His honor from The Athletic came one day after being named an Honorable Mention All-American – regardless of class – on Monday by Pro Football Focus and a week after being named the Big 12 Offensive Freshman of the Year and a Second Team All-Big 12 performer by the league’s coaches.”…K-State Sports, December 22

JM:  It’s great seeing Deuce Vaughn get a lot of recognition.  Receiving Big 12 freshman of the year over Spencer Rattler was a shock to many, but in my opinion, well-deserved.

“Thank you Kansas State for all of the memories. I cannot express how grateful I am to have been a part of this family. Thank you God for the journey and continued blessings. With that being said, I will be foregoing my extra season of eligibility and begin training for my pro day.”…Harry Trotter, December 19

JM:  The football player announcements have been coming fast and furious.   Trotter has decided to try out for the NFL.  So has linebacker Justin Hughes….

“After much consideration and conversation with my family, I have decided I will be declaring for the 2021 NFL Draft. It has always been a dream of mine to continue to play at the next level, and I can’t wait to see what all God has in store for my future.”…Justin Hughes, December 19

JM:  It hasn’t been all bad news on that front, however….

“Through all the challenges and obstacles we encountered this year, I feel like we have unfinished business to settle. With all this being said, I will return for the 2021 football season. I’m excited to see what we have in store, and I can’t wait to pound the stone in 2021. See you in September.”…Defensive back Jahron McPherson, December 22

JM:  Unfinished business?  What could that be?

“After a long discussion with my family, I’ve decided to declare for the 2021 NFL draft and will hereby forego my remaining year of eligibility to begin training for the draft immediately!”…Linebacker Elijah Sullivan, December 23

JM:  This one came through on Twitter as I was writing this column.  This is a huge loss, but I wish the best of luck to Elijah.

If I don’t get another column out in the next couple of days, I want to wish you all a Merry Christmas and Happy Holidays.  Thanks for reading, commenting and sharing and giving me great feedback.  GO CATS!