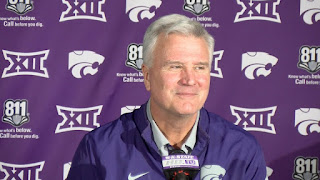 A great local writer who recently passed away, Greg Hall, had a column in the Kansas City Star (and later on his website) called “Off The Couch.”  He would take quotes that he heard or saw in the media and comment on what he had heard.  I thought I’d steal his format and change the name a tad while keeping the same idea and format.

Bruce Weber says some interesting things in press conferences.  Some people say he’s too honest.  I’d agree with that, but I also think he’s just a weird guy in general and has an odd way of communicating.  I thought I’d go back and take a look at some Bruce Weber quotes from this basketball season and try to find out where the season went off the rails.  Here we go.

“Right now (Shaun) is suspended. We’ll see how things go and when I think he deserves to get back in there. He’s got to have a great attitude. It’s a challenge to him to stay focused and do what he needs to do to get better. We can still use him. He’s talented. It’s a shame, but hopefully he can grow and learn from that.” …Bruce Weber after the first exhibition game against Emporia State, October 26, 2019

JM:  Remember Shaun Williams?  Maybe his suspension and subsequent transfer was a sign of things to come this season.  I’m not sure if he would have helped at all had he stuck around and had a better attitude, but it was still disappointing to lose him.

“They just played harder than we did and you’ve got to give them credit. They just had more energy and our play hard chart shows, the other night we have 51, tonight they’re winning 20-10 at halftime and they still win it at the end. We weren’t sharp and it is what it is, it’s disappointing. I talked on Monday, I got after them pretty hard about enthusiasm and passion and we just didn’t have it, but now you learn from it, you move forward and hopefully next time we’re ready to play.” …Bruce Weber, after a 66-56 exhibition victory over Washburn on October 30th, 2019.

JM:  If he got after them pretty hard and there was no result, I’d conclude that there might be a problem.

JM:  Why don’t you know if they’re ready?

“We’re a new team, a young team.” …Bruce Weber, after the Monmouth game on November 13th, a victory moving K-State to 3-0 on the season.

“It’s like a hangover, it hurts. I tried not to let (the Pittsburgh loss) affect the team, and I thought we did a good job of a staff to get them ready. I don’t think we weren’t ready, but they were more ready. They were embarrassed (by the Northwestern loss) and they came at us.” ...Bruce Weber after losing to Bradley on November 27th, 2019

JM:  They (Bradley) were “more ready.”  That one seems to be a recurring theme this season.

“An alcoholic can’t change unless he admits he’s wrong. Right now, we got our butts kicked. We’ve got to realize we’ve got to change. I know, they’ve got to know and they’ve got to believe it. That’s the first step.”  …Bruce Weber, after the Bradley game.

JM:  It appears that Bruce knew something was wrong and realized a change needed to be made.  Either he was unable to implement the changes or he decided not to.

“We said we have no one else except ourselves. We’ve been close in three games against pretty decent teams and we haven’t found a way to win. Now, we’ve got to find a way to win…. Bruce Weber, after a loss to Mississippi State on December 14th, 2019.

JM:  I’m not sure what to think about quotes like this.  It’s obvious that they have to “find a way to win.“

“Right now, our limo has got a flat tire and we have got to get on the bus.  We have got to stick together and do the dirty little things that are important.”…Bruce Weber, after a loss to Saint Louis on December 21st, 2019.

“All I can do — it’s a long-ass season. Eighteen games in this league and you’ve got to keep battling, you’ve got to come back, got to believe, got to help them, they’re young. Got to stay together, that’s the most important thing.”...Bruce Weber after the Oklahoma loss on January 4th, 2020.

“This game, probably TCU deserved to win, but it looked like maybe, we were going to be the one to come back and find a way. But to their credit, the tip-in at the end — David makes a big shot. I should’ve called timeout, in hindsight. Get our defense set, we’ve got a young team.”…Bruce Weber after the loss to TCU on January 7th.

JM:  This “young” thing seems to be a recurring theme!

Our guys, they care in the locker room, and obviously they are frustrated. We are trying to play a little undermanned and with some youth. Our older guys have not given us the efficiency and consistency that we need.”…Bruce Weber after the loss to Texas Tech on January 14th, 2020.

JM:  Ok, this “youth” thing is getting a bit ridiculous.

I gave them two days off. Most of them, I mentioned the other day, they were in there shooting, even when I gave them time off. They got into the weight room, got into film on their own. They care. It’s just — and I’ve joked about it, Groundhog Day. It’s Groundhog Day again and again. Problem is, Bill Murray can change something. I can’t change it.”…Bruce Weber after losing to Iowa State on February 8th.

JM:  This season sure has been like watching the movie “Groundhog Day,” so that’s a valid analogy.   However, why can’t he change it?  He’s the coach.

“I think I have decided I am going to coach them harder now, to be honest. For a while there I was trying to be (nice and say), ‘You are OK, we’re fine, give you hugs and kisses and all that stuff.’ I literally have kissed some guys in practice, just trying to make them feel good. From now on, I am going to coach them hard. If they don’t like it they don’t like it. That’s fine, I am going to try to do it the way I know and the way I think you can be successful.”…Bruce Weber during a press conference on February 10th.

JM:  Kissing players in practice?  Coaching them harder?  For the record, K-State has lost six straight since Weber made this statement.

“I wish I had an answer. We compete, we battle, but we just don’t make the right plays at the right time.”…Bruce Weber after the loss to Oklahoma State on February 11th.

JM:  Sounds like Bruce is just as confused as we all are when watching this team play.

“I’m just sad for our guys, because they really competed. I thought there was some very questionable calls. …I watched Star Trek, there was that invisible zone, you remember it? It was a force field. We’ve got to have a force field.”…Bruce Weber after losing to Texas Tech on February 19th.

JM:  I don’t mind a good Star Trek reference as long as it makes sense.  This one doesn’t.

JM:  Even though the team lost today to Kansas, they did show up and play well.  Looked like they just ran out of steam at the end.

“I told them that it can’t be the crowd. It’s about you and not letting yourself down. You work so hard to get here and if you love the game, you love your teammates and you’re proud to be at K-State, you come and get ready to play. Monday at practice, we’ll go to Oklahoma State with the same mindset. I hope they do. That was my wish in the locker room. I hope for their sake, we can get ready to play.”…Bruce Weber after the loss to Kansas on February 29th.

JM:  There is a lot of “hope” in Weber’s post game comments. He “hopes” the players get motivated to play or “hopes” they put in extra time at the gym or “hopes” that they play well.  “Hope” doesn’t win basketball games, unfortunately.  I think these comments, from the beginning of the season until now, show that Bruce Weber doesn’t really have any answers as to how to get this team to win.  And that is sad and frustrating for K-State basketball fans.