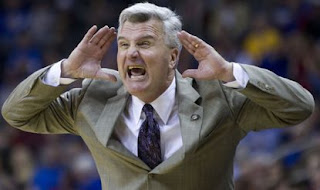 K-State fell to 2-9 in the conference after losing to TCU on Saturday night with six games remaining on the schedule.  This basketball season has been almost unwatchable.  However, Bruce Weber still has a lot of supporters in the fan base.  Guess he gets a pass with them since he tied for the conference lead last season.  He doesn’t get a pass from me.  I find this unacceptable. The team should not be this terrible.  Bruce has said on many occasions that he has no idea what to do to right the trip and has even resorted to kissing players in practice.  I wish I was making that up.

The last time K-State Basketball finished with two conference wins was 1945-46 when the conference was the Big 6.  They finished 2-8.  With a current winning percentage of .167, it’s the worst a K-State team has been in win percentage since finishing 1-9 in 1943, a .100 win percentage.

Yikes.  Can they win any of their remaining six games?