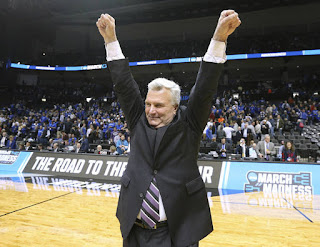 Coach Bruce Weber addressed the media via Zoom on April 15th.  A transcript was posted on www.kstatesports.com on April 17th.  Let’s dig in to what Weber had to say…

On the signing of Seryee Lewis…
“After we signed that group in the Fall, we felt as a staff we needed to add an athletic forward – big man – who could rebound, run the court and do those type of things and I think he really fits that mold. You have to give DaJuan (Gordon) some credit — Seryee is a friend of his — and I don’t know how many times that he text me or the staff encouraging us to reach out to him, to watch him. We finally got out there and started to watch him. He’s a great young man with a great family.”…Bruce Weber, April 17, kstatesports.com

JM:  According to 247sports, Lewis is the 287th ranked player nationally and is a three star player.  He was recruited by Brown, Columbia and Georgetown.  Must be a smart kid.  Not sure he’s a Big 12 caliber player, but we will find out.

“His mom hasn’t let him out of the house (with the pandemic) especially in the Chicago, so they finally got him a basketball hoop (for outside). I talked to him Saturday and he was excited about getting that set up.”…Bruce Weber, April 17, kstatesports.com

JM:  Hope he can get some pandemic driveway workouts in soon!

On the signing of Rudi Williams…
“After we had some conversations with David Sloan and the possibility that he might leave, we started looking at available point guards. We were very, very fortunate to latch on to Rudi. The first time I called him and if you have the chance to talk to him, you will love his personality, his smile. I love his energy. He rarely wears a shirt, which I’m not sure what that’s about.”…Bruce Weber, April 17, kstatesports.com

JM:  One thing you can’t knock Weber about is his blunt honesty and oversharing.  It makes for some funny moments.  Why does it matter that he rarely wears a shirt?  It doesn’t, I guess.  It’s just Weber trying to give us a glimpse of the type of person Williams is.

“He promises me that he can guard, so we will see about that as we get him into the program.”…Bruce Weber, April 17, kstatesports.com

JM:  And then there’s head scratching quotes like this one. Here he was expanding on his comments about Rudi Williams.  You offered him a scholarship and you don’t know if he can defend Big 12 players?  Alrighty then.

On the last scholarship…
“Ideally, we would like to get someone versatile (that can play both in the front and back court) for that last spot, but that might be a stretch at this point.”…Bruce Weber, April 17, kstatesports.com

JM:  How about finding a shooter?  I mean ANYONE that can shoot lights out from three point range.  That would be fantastic.

JM:  Bruce Weber, when evaluating the entire recruiting class coming in.  He “thinks” he has some scoring?  That doesn’t sound too promising.  Stay tuned to see how they fill the last remaining scholarship.