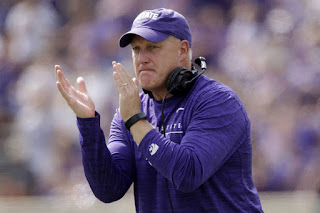 Both Chris Klieman and Bruce Weber addressed the media yesterday and kstatesports.com provided the transcript to both sessions.  I’ll start today by breaking down what Chris Klieman had to say.

“We’re very optimistic we’re going to play football this year. We just don’t know when, so we just have to make sure that we are ready as a staff to go at any time and make sure our players are ready as well.”…Chris Klieman, April 17, kstatesports.com

JM:  Klieman is confirming and reiterating the thoughts expressed by athletic director Gene Taylor last week.  These guys are planning on playing this fall.

I’ve talked to Coach [Joe] Klanderman – we’re not changing wholesale on defense. We are tweaking some things that Joe just feels more comfortable with, but the kids wouldn’t know it. The general fan wouldn’t know it. We’ll still look the same, but we have talked to those guys, whether it’s a new safety where Denzel [Goolsby] was at or somebody new on the defense line, we have to make sure our guys can play fast. So, probably defensively we’ll be a little more simple to start.”…Chris Klieman, April 17, kstatesports.com

JM:  The defense will probably look somewhat similar to what we saw last season.  That’s probably a good thing, especially with what’s going on right now with the Coronavirus restrictions.

“Assuming we would start on time, if we were in by July 13, I think we could start practice on August 1. Now, take that back however you want to take it, if we end up starting at the end of September. That’s the challenge for everybody and for our players is not knowing when that would be. We may get a call and have a week before we come in, or two weeks from a quarantine standpoint, but we have so many guys on our staff that have such great experience.”..Chris Klieman, April 17, kstatesports.com.

JM:  This is the first I’ve heard of the “end of September” start time.  Does this mean that we’ll only see a conference schedule this season or would they push the entire season back a month?  These are questions that weren’t answered yesterday.

JM:  Good!  Hope they can get some things done with some of the high profile recruits they are after.

JM:  Klieman was responding to a question from a reporter about any unique workouts his players were conducting.  I’d like to see some video of this kid working out pushing a truck!  We need to find out which player it is.  This would make for a good feature story!

“And it’s just meant the world to me to have Van [Malone] as the assistant head coach. Van has helped me so much, and Van is going to be a college head coach fairly soon.”...Chris Klieman, April 17, kstatesports.com

JM:  I know Van Malone has been a great recruiter for K-State, but this is the first I’ve heard someone say he’s going to be a head coach someday and “fairly soon.”

“We may play in front of an empty stadium.”...Chris Klieman, April 17, kstatesports.com

JM:  Apparently this option is still on the table.  K-State has done a huge push in the last couple of weeks to get people like me to renew their season tickets.  They have even extended the deadline a couple times now.  We haven’t renewed yet.  I want to talk to the ticket office to see how it’s going to work if we renew and they end up cancelling or shortening the season.  We also would like to know when the games are being played if the schedule is getting switched around.  There are so many questions and so few answers at this point.