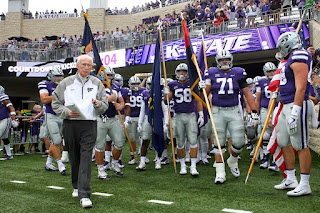 The topic of Chris Klieman’s ability to get high-caliber recruits, or lack thereof, has been discussed a lot among K-State fans this summer.  For every person that says “we need to secure more four-star players,” there is someone who points to K-State’s successful history of finding “diamonds in the rough.” Since this is becoming Twitter fodder with every commitment, a reader suggested that I rank the top five walk-ons in K-State football history.  I thought it would be interesting to look back and see how many K-State walk-ons found success both in the Big 12 and in the NFL.  I’ll be honest.  There were more than I thought there would be.  I ranked my top five based on a combination of college and NFL success and then included some honorable mentions at the end.  Without further ado, here are the top five walk-ons that played football at K-State.

Fullback Rock Cartwright was a walk-on Juco transfer from Trinity Valley Community College in Athens, Texas, and played two seasons for the Wildcats, 2000 and 2001.  He was drafted in the seventh round of the NFL draft by the Washington Redskins and played 10 years in the NFL for the Redskins and Raiders.   He had a total of 570 yards rushing and seven touchdowns in his two seasons as a Wildcat.  He became a kickoff return specialist for the Redskins, breaking the team record for return yardage in 2006 with 1,541 yards.

Defensive end Ryan Mueller graduated from St. Thomas Aquinas and walked on at K-State in 2010.  He finished his Wildcat career at number five on the school’s all-time sacks list.  Mueller was also the 2013 Big 12 defensive lineman of the year and made the All-Big 12 team in 2013 and 2014. He never caught on in the NFL, getting tryouts with the Philadelphia Eagles and San Diego Chargers in 2015 and 2016, and ended up playing a year in the CFL.

Defensive back Jon McGraw was born in Manhattan, KS, and went to high school at Riley County High.  He walked on in 1997, played four years, and got drafted in the second round of the NFL draft by the New York Jets.  He played 10 seasons in the NFL for the Jets, the Detroit Lions, and the Kansas City Chiefs.  While at K-State he was voted third-team All-Big 12 safety in 2001.

Offensive lineman BJ Finney was born in Wichita and attended Andale High School.  He walked on at K-State and started as a freshman and played all four years.  Among his accomplishments: 2014 second-team All-American, a finalist for the Rimington Award, and a three-time first-team All-Big 12 selection.  He signed with the Pittsburgh Steelers as a free agent in 2015 and played for the Steelers from 2015 to 2019.  He spent some time with the Seattle Seahawks and Cincinnati Bengals in 2020 before signing with the Steelers again in 2021.

Wide receiver Jordy Nelson is perhaps the best-known walk-on to play for Kansas State.  He was born in Manhattan and, just like Jon McGraw, went to Riley County High School.  He played at K-State from 2003 to 2007 and was a star receiver, winning multiple awards and accolades.  He was a consensus first-team all-American in 2007 and drafted in the second round of the 2008 NFL draft by the Green Bay Packers.  He made the pro-bowl in 2014 and won a Super Bowl with the Packers in 2011.  He also led the NFL in touchdown catches in 2016.  He was added to the K-State Ring of Honor in 2015 and inducted into the Kansas Sports Hall of Fame in 2020.  He played 10 years for the Packers and played one season for the Oakland Raiders in 2018 before retiring.

What other school has a list of successful walk-ons as good as this one?  I’d like to know.