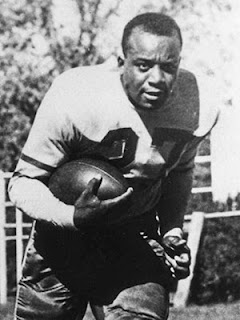 I’m a huge K-State sports fan, but if you’re around my age (48) anything K-State football-related pre-1989 is kind of “fuzzy.”  To be honest, the first time I ever heard of Veryl Switzer was when I bought a version of the NCAA football video game in my younger days.  They had an “All-time Kansas State team” and Veryl Switzer was the running back.  Switzer was voted to the Kansas State football ring of honor as a member of the inaugural class in 2002 and I’ve always wondered “what did he do to get his name up there?”  Not in a dismissive way by any means, but just because I didn’t know.  Researching this article helped me realize that he is well-deserving of being a member of the inaugural class.  Hope you enjoy learning a little bit more about Veryl Switzer as I did….

“Veryl A. Switzer, born in 1932 in Nicodemus, the son of Fred and Ora Switzer and descendent Zach Fletcher, one of the first settlers in Nicodemus.”….Kansapedia, Kansas Historical Society

JM:  The first thing I did when reading this was to hop on my search engine and type in “Nicodemus.”  Where is it?  What’s the story behind it? I found out that it’s one of the most historic places in the state of Kansas….

“He was born in Nicodemus, Kansas in 1932. Nicodemus, now a National Historic Site, was founded in 1877 as a refuge for former slaves from the South looking for a better life and some farmland of their own. By the 1880s, over 600 people lived in the town, but by the time that Switzer was born, the population had dwindled to little more than 100, but it was a close-knit community. He recalled to the Chicago Tribune in 1985, ‘I grew up liking people. I didn’t grow up with a single enemy.’”…August 6, 2019, Packers Past Perfect Blog, https://packerspastperfect.wordpress.com/2019/08/06/best-wishes-to-veryl-switzer/

JM:  According to the Nicodemus National Historic Site website, formerly enslaved African Americans left Kentucky at the end of the of post-Civil War Reconstruction period to experience freedom in the “Promised Land” of Kansas.  Switzer’s descendants were among the first settlers of Nicodemus.

“Veryl attended a one-room schoolhouse until high school when he went to nearby Bogue and became a schoolboy star athlete who won the first football scholarship that Kansas State had ever given to a black athlete.”…August 6, 2019, Packers Past Perfect Blog, https://packerspastperfect.wordpress.com/2019/08/06/best-wishes-to-veryl-switzer/

JM:  Is it okay to call him the Jackie Robinson of Kansas State athletics?

“In 1950, Switzer accepted an athletic scholarship from Kansas State. From that point, the story becomes a nightmare for Switzer’s opponents.”…K-State Sports.com

JM:  I’m guessing freshmen couldn’t (or didn’t) play back then.  Otherwise, he might have been an All-American all four years.

“The ‘Cats broke a string of five-straight seventh place finishes in the Big Seven that year (1953) by skyrocketing to second.”…K-State Sports.com

JM:  Another football season “way back when” that K-State football almost won the conference.  Thanks in large part to Switzer.

“He held the career punt return record at KSU until 1995 and scored the second longest punt return touchdown in school history (93 yards on Sept 19 1953, one of two he posted that year). His best year was 1953 when he led Kansas State in rushing with 558 yards, receiving with eight catches for 211 yards, scoring with eight touchdowns and 49 points, punt returns with a 31.0-yard average and kick returns with a 22.3-yard  average.”…American Football Database

“As a sophomore, he received All-America notice, and as a senior, he led the Wildcats to their first winning season in 17 years. He also returned a punt 93 yards for a touchdown against Drake that season.”…August 6, 2019, Packers Past Perfect Blog, https://packerspastperfect.wordpress.com/2019/08/06/best-wishes-to-veryl-switzer/

“He was the first halfback and the fourth player overall selected in the 1954 NFL draft by the Green Bay Packers.”.…K-State Sports.com

JM:  Switzer remains the highest-drafted K-State football player of all time.  Terence Newman was the fifth overall selection in 2003.

“In his rookie season, he topped the NFL in punt returns with a 13-yard average.”…K-State Sports.com

JM:  Didn’t take Switzer any time at all to make a name for himself in the NFL.

“In his two years as a Packer, swift and shifty Veryl averaged 9.7 yards per punt return and 25.5 yards per punt return. On offense, he ran the ball 31 times for 5.2 yards per carry and caught 31 passes for 8.7 yards per reception as the Packers tried to utilize his versatility.”…August 6, 2019, Packers Past Perfect Blog, https://packerspastperfect.wordpress.com/2019/08/06/best-wishes-to-veryl-switzer

JM:  Switzer played two seasons in the NFL before completing his military obligation, serving in the U.S. Air Force. After the service, he played three years of Canadian football.  One year with the Calgary Stampeders and two years with the Montreal Alouettes.

“The biggest play of his pro career was a 93-yard punt return touchdown against the Bears in November 1954. A year later on November 6, 1955, the Bears made him pay for that success. Switzer was returning a kickoff that day when the Green Bay wedge broke down, and Bears Hall of Fame linebacker George Connor came charging through with his head down and drilled Veryl so hard in the chest that the Packer’s helmet popped off his head with the chin strap still buckled. Switzer went one way and the ball the other.”…August 6, 2019, Packers Past Perfect Blog, https://packerspastperfect.wordpress.com/2019/08/06/best-wishes-to-veryl-switzer

JM:  This is a play that lives in infamy to this day.  That is if you’re a Packer fan, anyway.  Bears fans talk about it as a badge of honor.

“Gary Knafelc later told Christl and D’Amato for Mudbaths and Bloodbaths, “That was the worst hit I ever saw in my life. To this day, it’s the worst I’ve ever seen. I mean, the whole stadium, there wasn’t a sound. They thought Switzer was dead.”…August 6, 2019, Packers Past Perfect Blog, https://packerspastperfect.wordpress.com/2019/08/06/best-wishes-to-veryl-switzer

JM:  This hit affected Switzer for a long time after it happened…

“Veryl recalled years later to the Press-Gazette, “He caught me in the chest with his helmet and tore my sternum. He lifted me right up in the air. It was a blind hit and I was out for about three, four minutes. My helmet went straight up in the air and when they picked it up my chin strap was still intact. I went back in after that, but the next day I couldn’t move and I bled internally for about six weeks after that game. It didn’t stop me from playing, but every time I got bumped I spit up blood.”…August 6, 2019, Packers Past Perfect Blog, https://packerspastperfect.wordpress.com/2019/08/06/best-wishes-to-veryl-switzer

“Connor is remembered for one devastating tackle of Green Bay’s Veryl Switzer on a kick return in Wrigley Field in 1955. Switzer’s helmet flew one way, the ball another, and Bears linebacker Bill George recovered the fumble for a touchdown.

‘After five minutes, there was a roar from the crowd,’ Connor once recalled. ‘I asked Johnny Lujack what happened and he said, ‘Switzer just got up.'”…Huron Daily Tribune, March 31, 2003

JM:  The above excerpt is from the announcement of George Connor’s death.  He was always known for that hit.

“He (Switzer) spent a decade working at the Chicago Board of Education before returning to KSU in an administrative capacity in 1969.  He held several positions, both in the academic and athletic departments before retiring.  Switzer served as Associate Dean and Assistant Vice President for Minority Affairs from 1973 to 1988, as chairman of the Intercollegiate Athletics Department from 1978 to 1988, and in a variety of other administrative positions until retiring in 1999.”…
http://www.robinsonlibrary.com/geography/recreation/sports/football/biography/switzer.htm

JM:  Switzer worked for K-State while I was a student in Manhattan, but I don’t recall ever meeting him or running into him.

“’I could get on base any time,’ the senior Switzer said from the sidelines of the ball field where the 77-year-old retired K-State administrator suited up for a vintage baseball game as part of the Nicodemus Blues II, a re-incarnation of the town baseball team, to take on a visiting team, the Hodgeman 9 Base Ball Club, from Hodgeman County.

JM:  Switzer and a few others hold fundraising events in Nicodemus such as this baseball game in an effort to keep the town going.  Switzer still lives in the area and owns a lot of farmland around Nicodemus.

“The vintage baseball game, which was played according to the rules of the games in the 1860s, is a new addition to the Nicodemus Homecoming Emancipation Celebration, an annual gathering of descendants of the town’s founding families who were recruited from the Reconstruction South and moved in September 1877 to the high plains of Kansas.”…Topeka Capital-Journal, July 31, 2010

JM: Switzer is currently 88 years old. Below is a picture of him from about 11 years ago. 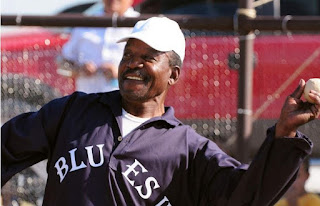 This was a fun post to write.  I think a trip to Nicodemus has been added to my bucket list to visit in the near future!

Thanks for reading.  Up next on the list is David Allen!

2 thoughts on “From The Couch: K-State Ring Of Honor Member Veryl Switzer”