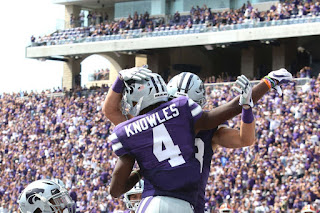 K-State beat Bowling Green 52-0 yesterday in what proved to be quite a mismatch.  Bowling Green has played K-State twice in their history and hasn’t scored a point, also losing 58-0 in 1997.  Not sure they’ll bother to schedule another match-up with the Cats anytime soon.

K-State has gained over 500 yards of total offense in the first two games of the season for the first time in school history.  Personally, I think Chris Klieman wanted to make a statement in these first two games by going “all out” and giving the players some confidence.  Bill Snyder was notorious for not showing much of the offense or defense in the non-con games against inferior opponents. I think Klieman threw all caution to the wind.  Still, it’s an impressive stat.

I attended the game in person and I watched the broadcast of the game this morning.  K-State moved the ball at will on the ground and through the air.  They rushed for 333 yards and threw for 188.  Bowling Green rushed for 61 and threw for 79, getting outgained 521-140 in total yards.

Since it was such a mismatch, it’s hard to glean much from this game.  I heard on the radio on the way home that Klieman played 88 players in the game.  I think that’s gotta be some sort of record as well.  I was impressed with true freshman running back Jacardia Wright, who led the team in carries with 14 and rushed for 59 yards.  All of the running backs performed well in my opinion, but Wright looked impressive for a true freshman running the ball.

Malik Knowles also looked great, catching five passes for 99 yards and two touchdowns.  I was a bit worried after the first game when he dropped a couple of passes, but he looked great yesterday.  We’ll need him to keep performing at a high level.

The schedule gets much tougher from here on out.  K-State travels to Mississippi State next Saturday.  They are 2-0 starting the season with a 38-28 victory over Louisiana Lafayette in week one and a 38-15 victory over Southern Mississippi yesterday.  More importantly, Mississippi State beat K-State in Manhattan last year 31-10 in a game that was never close.  Mississippi State has lost some talent off of that team, but they still have some horses and SEC size, speed and talent.  It will be an interesting game.  Vegas has made Mississippi State early nine point favorites.  This will be a tough game for K-State and will give us a good preview to see whether or not Klieman’s offensive philosophy will work in the Big 12 this year.  Running the ball at will when you have a more talented team than the opposition is great, but will it work against teams with equal or more talent than what K-State has?  We’ll find out.  Can’t wait to watch.