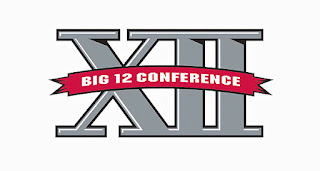 Last night KU basketball and Oklahoma football played games at almost exactly the same time.  Of course both won, which surprised nobody who follows this league.  The Big 12 has become downright boring.

Oklahoma has won the football championship 11 times since the year 2000, including the last three titles, and will win their fourth straight after beating Texas in the Big 12 championship next weekend.

Kansas has won or tied for the basketball championship the last 14 seasons.  We all know “Team Adidas” has the advantage of Adidas paying and funneling the best high school talent in the country to Lawrence, Kansas to play basketball, which creates an uneven playing field in the Big 12 that nobody seems to care about except fans of the other 11 schools that can’t compete because of the unfair system which exists.

Oklahoma also has an advantage of having some of the best high school talent come play for them.  Maybe it will be reported some day how they get all the best players in the region.  Or maybe not.

Texas is also back.  Ho hum.  It looks like they will be competing with OU at the top of the league for the foreseeable future unless something dramatic changes.

All of this makes for a very boring league to watch.  KU has the best players funneled to them and wins the league every year.  Who cares anymore?  OU gets the best players and wins the league every year.  Who cares anymore?  Some drama and competitiveness in the Big 12 would be nice, but the league is not trending that way.  It’s trending the opposite way.  It’s not even fun to watch anymore.  When the same two teams dominate the conference in the two main sports there is nothing to get excited about unless you are a fan of either of those schools.  All it means is the rest of us will be bored as usual.  Might be a good time to find something else to do with my time.