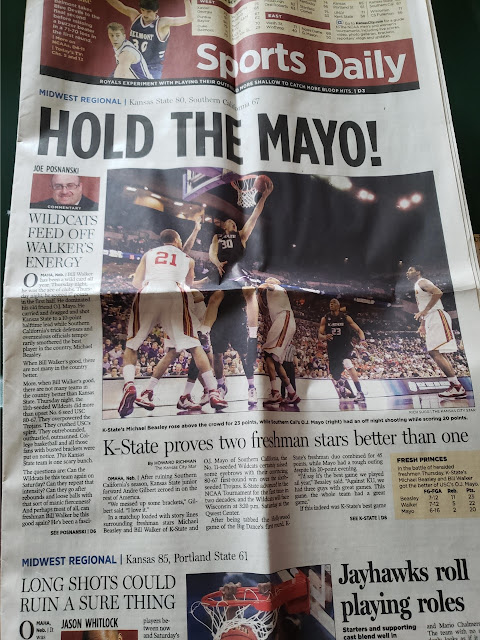 I tend to be a pack rat, especially when it comes to K-State stuff.  I’ve been cleaning out my storage room the last couple of weeks and found this old newspaper from 2008.  It was the first time K-State made the NCAA tournament since 1993 and the team was led by future NBA players Michael Beasley and Bill Walker.  They drew USC, led by OJ Mayo, in the first round.  OJ Mayo was considering going to K-State before committing to USC that season.  One thing I noticed upon reading this again was that K-State was receiving top billing at the time, even above KU, who had an article near the bottom of the page after their victory over Portland State in the tournament.

I saved the paper because it was K-State’s first NCAA victory in a very long time and there was a lot of excitement around the basketball program for the first time in a very long time as well.  It was kind of fun to find this and read through it again.  I might get it framed and hang it on the wall with my other K-State “stuff.”