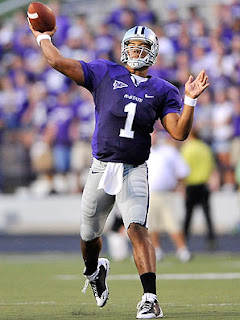 The Kansas State NFL draft streak continued in 2009 when Josh Freeman was drafted in the first round, number 17 overall, by the Tampa Bay Buccaneers.  Josh played six seasons in the NFL, playing in 62 games and starting 61 of them.  He played five years with the Buccaneers and also played for the Minnesota Vikings and Indianapolis Colts.  He most recently played for a couple of teams in the CFL and recently announced his retirement from football on May 26th, 2018.

His NFL stats are below:

Freeman holds several Tampa Bay franchise records that I was not aware of:

Not sure what Josh’s plans are after his retirement from football.  We’ll have to wait and see.