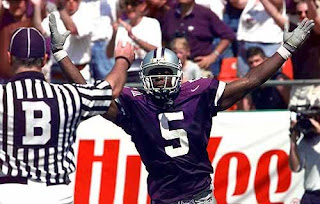 K-State’s NFL draft streak reached 25 years in a row with the selection of DJ Reed by the San Francisco 49ers in the 5th round yesterday.  Today I look back on the draft class of 2001 where six K-State players were chosen.  This draft class was made up of Quincy Morgan, Shad Meier, Monty Beisel, Mario Fatafehi, Jarrod Cooper, and Jerametrius Butler.

Wide receiver Quincy Morgan was drafted in the 2nd round, number 33 overall, by the Cleveland Browns.  He played six years in the NFL for four teams: the Browns, the Dallas Cowboys, the Pittsburgh Steelers, and the Denver Broncos.  He won a Super Bowl in 2006 playing for the Steelers.  He played in 86 games in his career, starting 52.  His best season was in 2002 with Cleveland when he had 56 catches for 964 yards and seven touchdowns.  His stats, according to Pro Football Reference, are below:

I enjoyed watching this video of Jonathan Beasley throwing a 90 yard touchdown to Morgan against KU: 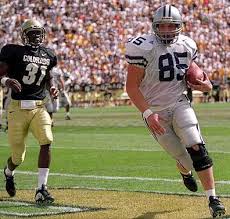 Tight end Shad Meier was selected in the 3rd round, number 90 overall, by the Tennessee Titans.  He played four years for the Titans before being traded to the New Orleans Saints, where he played his final season.  He played in 53 games, starting 13 of them.  His stats, according to Pro Football Reference, are below:

Meier is currently a Health/Wellness teacher at Franklin High School in Franklin, Tennessee. 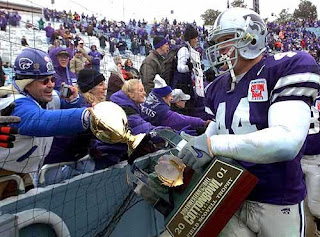 Defensive end Monty Beisel was drafted in the 4th round, number 107 overall, by the Kansas City Chiefs. He played nine seasons in the NFL for the Chiefs, New England Patriots and Arizona Cardinals.  He played 119 games in his career, starting 19.  His stats, according to Pro Football Reference, are below: 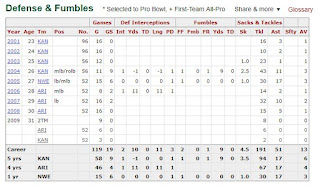 I found an interesting tidbit on his Wiki page.  He was the first player in NFL history to win an overtime game by returning a blocked punt for a touchdown. 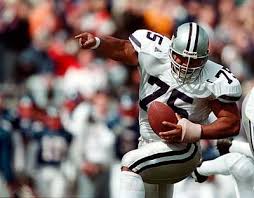 Defensive tackle Mario Fatafehi was drafted in the 5th round, number 133 overall, by the Arizona Cardinals.  He played four years in the NFL for three teams.  He played a year for the Cardinals, a year for the Carolina Panthers, and two years for the Denver Broncos.  He played in 45 games overall, starting 26 of them.  He ended up his career playing a season for the Hamilton Tiger-Cats of the CFL in 2006.  His stats, according to Pro Football Reference, are below:

I found a Q/A interview with Fatafehi on the Broncos website from 2004 that is interesting. 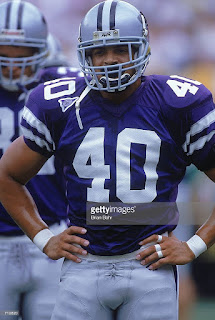 Defensive back Jarrod Cooper was drafted in the 5th round, number 143 overall, by the Carolina Panthers.  Cooper played seven years in the NFL, splitting time between the Panthers and Oakland Raiders.  He played in 87 games, starting 10, including a Super Bowl while playing for the Panthers.  His stats, according to Pro Football Reference, are below: 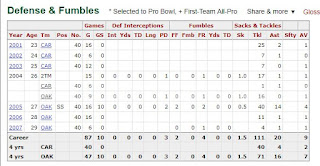 Cooper retired from the NFL due to recurring head injuries.  Cooper currently lives in Oakland, California, volunteering for the Oakland animal shelter. 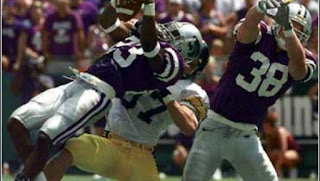 Jerametrius Butler was drafted in the 5th round, number 145 overall, by the St. Louis Rams.  Butler played six seasons in the NFL, five for the Rams and one for the Buffalo Bills.  He had a pretty bad knee injury in 2005 that caused him to sit out the season and he never fully recovered, eventually retiring.  His stats, according to Pro Football Reference, are below:

I am unable to find much information about what Butler is up to now.  I found his Facebook page, but it’s pretty locked down.

Doing this research is pretty interesting so far.  There is a definite correlation between the number of players K-State had drafted and how good K-State was the prior year.  The years K-State was competing for Big 12 championships, K-State was getting five to six players drafted every year.

It’s also interesting to note how many players had their NFL careers cut short due to injury.  I figured the percentage was pretty high, but it’s actually higher than I thought it would be.  I also find it interesting that some players drafted in the late rounds had fairly long NFL careers.  Wonder if this is unique to K-State players or is an overall trend?  It would be interesting to know the averages and whether K-State draftees are above or below the average.