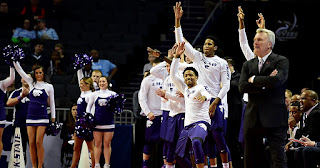 K-State beat Creighton 69-59 last night in the first round of the NCAA tournament.  The Wildcats held Marcus Foster to five points and controlled the game throughout.  K-State will play UMBC in the second round.  UMBC shocked the world, becoming the first 16 seed to ever beat a one seed in the tournament.

This should be an interesting game.  Dean Wade is still a question mark and probably won’t play again.  K-State opened as 10 point favorites in this one according to the Vegas odds makers.  UMBC is ranked 168 in the Pomeroy computer ratings and K-State is ranked number 37.  On paper this one should not be close, but Virginia and their fans thought the same thing going into that first round match up.

I’m predicting a K-State victory moving on to the Sweet 16.  However, I believe the game will be close throughout.  Let me know what you think in the comments.