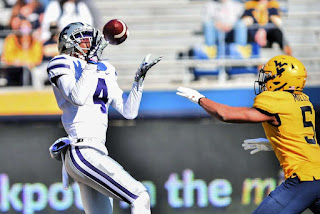 The Kansas State Wildcats traveled to Morgantown for a game yesterday against the West Virginia Mountaineers.  Calling this a “game” might not be fair.  A “shellacking” might be a better descriptor.  Let’s take a look at what happened….

“Quite frankly, Will Howard has looked shaky thus far.  Two out of those three passes weren’t very good decisions at all.  Three defenders surrounding Brooks, the intended receiver.”…Kelly Stouffer, ESPN

JM:  Will Howard set the tone on the first series of the game when he threw an interception less than a minute into the game.  This was a rough one for the true freshman quarterback as he ended the day 19/37 for 184 yards with a touchdown and three interceptions.

“And the one thing that I’m not worried about is Will’s confidence. This kid’s got that ‘it’ factor.”…Chris Klieman, post game.

JM: I commented during the game that Will Howard looked nervous and shaken most of the game.  Of all the college football teams in the country that have played more than one game, West Virginia had the highest ranked defense.  They were all over the field playing aggressively and hitting hard. Howard didn’t have many places to throw the ball.  It seemed that he was throwing into double and triple coverage all day.  He’ll need to put this game behind him quickly.

“The 10 points are the fewest the Wildcats have mustered in a game under Klieman … and the lowest tally since scoring six, in their most recent visit to Morgantown prior to Saturday, in 2018.”…Ryan Black, Manhattan Mercury

JM:  This is kind of a misleading stat.  The Wildcats scored 12, 13 and 17 points in losses under Klieman in 2019, so while 10 points is the fewest that a Klieman coached K-State team has scored, there is a history of low scoring games.  This team has to score to win.  I know that sounds obvious, but the defense isn’t out there shutting out the competition.

“Their 225 yards of total offense is a low point this season. (Previous: 289 in a win at TCU.)”…Ryan Black, Manhattan Mercury

JM:  West Virginia was giving up 261 yards a game going into this one, so this is not necessarily a surprise.  What is concerning is the next opponent, Oklahoma State, also has a great defense that is ranked in the top 20 in the country.

“They rushed for only 41 yards, another season low, as well as the worst in Klieman’s two seasons in Manhattan.”…Ryan Black, Manhattan Mercury

JM:  The Wildcats came out passing in this one.  I think they knew going in that running the ball would be a struggle and it was.  They passed the ball 37 times and ran it 23.  Some of that is because they were way behind in the second half, but you don’t want to see a large discrepancy like that in running vs passing plays.

“K-State freshman quarterback Will Howard tossed three interceptions. The last time the Wildcats had three passes picked off in a game was in 2015, when they were flattened 55-0 by Oklahoma.”…Ryan Black, Manhattan Mercury

JM:  Joe Hubener and Cody Cook combined for the three interceptions in that Oklahoma game.  I thought I had erased that game from my memory, but nope, I still remember it.

“In eight years as a head coach, spanning 103 games entering Saturday, Klieman’s most lopsided loss came in his lone season at Loras College — his first head coaching gig — in a 21-0 setback to Central College on Sept. 24, 2005. The most one-sided loss until Saturday’s 27-point spread, anyway.”…Ryan Black, Manhattan Mercury

JM:  I found it interesting that this was the worst loss in Chris Klieman’s coaching career.  Klieman coached teams typically do not get blown out like this.  His losses are usually close games.  Wins are as well for that matter.  Let’s hope this one is an anomaly.

“It was a back injury. I don’t know the severity of it. It kind of locked up on him (Briley Moore) when he got speared from behind in the back. It just locked up on him, from what I understand, and they couldn’t get it loose. So we weren’t going to take any chances.”…Chris Klieman, post game

JM:  The injury to Briley Moore happened in the first half and he did not return to the game.  He got a helmet to the back on a tackle that I thought was a questionable play by the West Virginia defender.  There was not a flag thrown.

“Senior defensive back AJ Parker didn’t travel with the Wildcats for Saturday’s game. Parker, who injured his ankle in the second quarter of last week’s win over Kansas, was day-to-day all week. When K-State departed Manhattan on Friday, Parker stayed behind.”…Ryan Black, Manhattan Mercury

JM:  The loss of AJ Parker was noticeable, but I’m not sure it affected the outcome of the game.  It appeared that the Mountaineers had open receivers all over the field all game long, so having Parker might have made a difference.  Having him available for the game against Oklahoma State will be a plus.

“Kansas State running back Deuce Vaughn, who entered ranked sixth in the league in rushing at 61.8 yards per game and second in receiving at 72 yards per game, was held to 23 yards on 11 combined touches.”…Ben Queen, USA Today

JM:  The Wildcats couldn’t get anything going with Deuce Vaughn.  The Mountaineers did a great job of bottling him up.

JM:  Neal Brown was a rumored candidate for the K-State coaching job a couple of years ago before Gene Taylor hired Chris Klieman.  Brown seems to have things turned around quite nicely after a 5-7 record in his first season.  The Mountaineers have one of the top defenses in the country and are a game out of first place in the Big 12 with four games to go.

Despite the disappointing performance yesterday, K-State is still tied for first place in the Big 12 with Iowa State and is a half game ahead of this weekend’s opponent Oklahoma State.  Texas, Oklahoma and West Virginia remain a game back of first place.  The race for the Big 12 title is going to be exciting down the stretch.