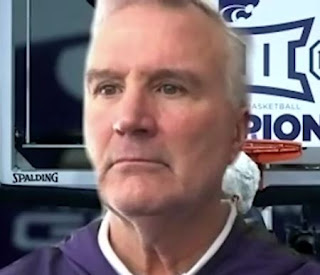 Bruce Weber met with the press today.  Most of the questions he received during the press conference were about the Baylor game tomorrow night.  There’s not much to report, but I found a couple of his answers interesting.

“We lost by infinity the first time so I don’t know if you can go higher than infinity.”…Bruce Weber, January 26, 2021

JM:  Actually, the Wildcats lost by 31 points to Baylor on December 19th, not “infinity.“  Could it be worse this time?

JM:  Bruce was replying to a question asking what he thought about Packers coach Matt LaFleur’s decision to kick a field goal near the end of the game against the Buccaneers on Sunday instead of going for a game tying touchdown.  While this is not relevant to K-State basketball, a reporter asked him because Bruce is a Packer fan.  I found the answer interesting because he refused to be critical of the decision.  He continued…

JM:  These comments got me thinking.  Have you ever heard a coach say “coaching is not much fun” or “coaching sucks?”  I suppose I understand his point was that coaching sucks because you receive a lot of criticism, but that’s part of the gig and he knows that.  I found both of these comments odd to say the least.

JM:  Bruce wasn’t asked a question about the Chiefs, but decided to mention this anyway.  What does this have to do with anything?  Is he trying to gain favor with the fan base by letting everyone know he’s a Chiefs fan? I don’t really care either way, but just found it interesting that he decided to make this point.

The game tomorrow at Baylor starts at 8:00 and will be broadcast on ESPN2.  I have a feeling it’s going to be closer than a lot of people think.

2 thoughts on “From The Couch: To Infinity And Beyond!”