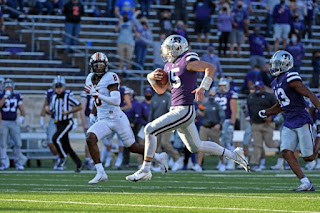 I’m finally getting around to writing my column about the game last Saturday against Oklahoma State. It only took me five days!  Let’s just say it’s been a busy week.  Anyway…

Normally I re-watch each game on Sunday morning to help refresh my memory and to takeaway the key moments from the game prior to sitting down and writing.  The key moments in this one were easy to remember and this one hurt more than most because victory and first place were well within grasp for the Wildcats.  I was able to sit down and watch the replay today so let’s take a look at what happened…

“K-State turned in a dominating first-half defensive performance, and after settling for field goals on their first two trips to the red zone, the Wildcats finally broke through with a touchdown 37 seconds before intermission.  On third down and goal from the Oklahoma State 4-yard line, Howard found Phillip Brooks in the back of the end zone to make it 12-0. But a two-point conversion pass toward Brooks was incomplete, which would come back to haunt them.”…Arne Green, Topeka Capital Journal

JM:  The call to go for the two point conversion so early in the game was curious and unnecessary, in my opinion.  I wasn’t the only one thinking that way…

“Some would say it may be early to chase points.  But they had this.  Could have easily been caught.” Tim Brando, Fox, with 37 seconds left in the half.

JM: Brooks could have and should have caught the two point conversion, but what was the reason for going for two at that point in the game?  This missed conversion changed how the second half was played by both teams and it also seemed to give Oklahoma State the momentum starting the second half.

JM:  Oklahoma State running back Chuba Hubbard was injured during the game and the Cowboys were also without leading receiver Tylan Wallace due to injury, but the Wildcat defense showed up and played extremely well against the Cowboys.  Especially in the first half.

“After six first-half punts, Oklahoma State finally got on the board with a field goal. Then the Cowboys forced a three-and-out, and Brown ripped off a 50-yard run to set up Brennan Presley’s easy touchdown jaunt on a jet sweep. And when Alex Hale added another field goal, the Cowboys had a 13-12 lead, their first of the game.”…Dave Skretta, AP

JM: Had Chris Klieman opted to kick the extra point at the end of the first half instead of going for two the game would have been tied at this point.  The next Oklahoma State touchdown put them up eight points instead of what should have been a seven point deficit.

“Jason Taylor II returned a fumble 85 yards for a touchdown late in the fourth quarter, and Oklahoma State stopped the Wildcats’ 2-point try that would have tied the game with 2:08 to go, allowing the No. 14 Cowboys to escape with a 20-18 victory Saturday night that kept their Big 12 title hopes alive.”…Dave Skretta, AP

JM:  Oklahoma State returned Will Howard’s fumble for a touchdown to go up eight points.  The Wildcats marched right down the field and scored a touchdown, but a failed two point conversion ended up being the final deficit.

“The Wildcats (4-3, 4-2) were forced to try for the tying 2-point conversion after Will Howard’s short TD run because of their odd decision to attempt a 2-point try to stretch a 12-0 lead in the first half. Howard was incomplete on that one, and he never got a pass off on the second — he fumbled the ball as the pocket collapsed around him.”…Dave Skretta, AP

JM:  Instead of the possibility of tying the game, the Wildcats were forced to go for two and were unsuccessful on the conversion attempt.  They still had a chance to win the game, but this was very frustrating to watch at the time it happened.

“Oklahoma State guided the ensuing onside kick out of bounds and ran some time off the clock before punting back to the Wildcats, but Howard immediately threw an interception with 1:47 to go to seal their fate.”…Dave Skretta, AP

JM:  Howard’s interception to end the game was a freshman mistake that I hope he learns from.

“You are always trying to get to those 14 points rather than chasing it later on.”…Chris Klieman, post game

JM: Huh?  This explanation by Klieman doesn’t make much sense to me.  If he decides to kick the extra point in the first half the game goes to overtime instead of being a loss.

“Chris Klieman put it bluntly: The Kansas State football team will try to do “the best it can” in practice this week. Klieman, the Wildcats’ second-year head coach, said during his weekly press conference Tuesday that following a recent coronavirus outbreak among its younger players, the team is “down upwards of 20 guys right now.”

Most worrisome, Klieman said, is that the number is rising.

“We have to be really creative with what we do this week,” said Klieman, whose team is in the middle of its third and final open date of the season. “We have a few young guys who have already had it. If they haven’t had it, they’re probably either in quarantine or isolation.”…Ryan Black, Manhattan Mercury, November 10th

JM: Covid is not done wrecking havoc on the Wildcats.  This does not bode well for the game against Iowa State in Ames a week from Saturday.  Ugh.

“K-State head coach Chris Klieman announced Tuesday that Wheeler, a third-year sophomore tight end, will miss the rest of the Wildcats’ 2020 campaign after fracturing his clavicle in last week’s loss to Oklahoma State.

“Unfortunately his season is cut short again,” Klieman said. “I feel awful for him because he was doing some really good things.”…Ryan Black, Manhattan Mercury, November 10th

JM:  With Sammy Wheeler out for the season and Briley Moore out with an injury, the Wildcats are awfully thin at tight end.

What do you think of K-State’s chances against Iowa State?  Let me know in the comments.  If you like these columns, please share them with your friends on social media.  I’d appreciate it.  Thanks!