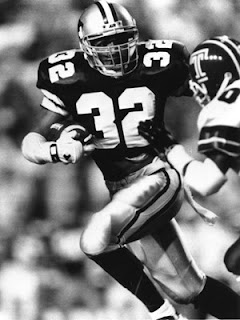 K-State great Jaime Mendez was inducted into K-State’s Ring of Honor in 2002 as part of the inaugural class with Lynn Dickey, Steve Grogan, Sean Snyder, Gary Spani, and Veryl Switzer.  Mendez is also a member of the K-State Athletics Hall of Fame and the Kansas Sports Hall of Fame.  He still holds the K-State record for interceptions in a game (4) and career (15). There is not a lot of information out there about Jaime Mendez, but here are some interesting tidbits that I found….

“Jaime Mendez became Kansas State’s first defensive consensus All-American under Bill Snyder in 1993. Playing safety, Mendez was a three-time All-Big Eight player who helped the Wildcats to their first bowl in the Snyder era. He came to K-State from Youngstown, Ohio.”…Wichita Eagle, June 8, 2016.”

“Jaime Mendez, former K-State safety: We were close to winning a conference championship. We only lost two games. We tied Colorado (16-16), and that was because we missed a friggin extra point. We lost to Nebraska (45-28), but we were right there with them on the road most of the way. What really hurt us was a hiccup at Iowa State (27-23). We shouldn’t have lost that game. We could have been playing in the Orange Bowl.”…Wichita Eagle, December 21, 2017

JM:  Mendez was interviewed for this article regarding the 1993 Copper Bowl team.  K-State had a great team that year and a few bounces here and there going their way and it could have been even better.

“I don’t remember much about the game, but I remember everything about that. The entire team was making fun of us. My pants were extremely tight and my hat was too small and they didn’t have shoes for me. I wore sneakers and they filmed me from the waist up. They had us get off this train and our guys were destroying me. The guy who was filming the commercial, by the end, was really upset with me, because I couldn’t say my lines. I was laughing too hard. I tried telling him, ‘I’m no actor. I’m a football player.’”…Jaime Mendez, Wichita Eagle, December 21, 2017

JM:  Mendez was referring to the “Tombstone” western-themed Copper Bowl introduction, narrated by Kevin Harlan.  The video is on YouTube here.  It’s worth the watch.

“We were so bad. The Wyoming players all had lines, but they took ours out. That’s probably a good thing. Thankfully, we played better than we acted.”…Jaime Mendez, Wichita Eagle, December 21, 2017

JM:  What I find most interesting looking back on the Copper Bowl is the pre-game hype.  Nobody was predicting a K-State blowout and some were even predicting a Wyoming victory. The game ended up being one of the biggest bowl game mismatches in K-State history, with the Wildcats getting a 52-17 victory.

“We went in there with a tremendous amount of confidence. It might be odd to think that way for a team that had never had success. But we knew how good we were.”…Jaime Mendez, Wichita Eagle, December 21, 2017

JM:  They sure played with a lot of confidence. They also made a statement that K-State was here to stay.

“It was gratifying to know the program was on good footing. As long as Coach Snyder stayed, which was a big worry back then, and he kept that staff together we knew we weren’t going to be a one-hit wonder.”…Jaime Mendez, Wichita Eagle, December 21, 2017

JM:  I was a student at K-State at this time and there were multiple rumors after every season that Bill Snyder might leave to coach elsewhere.  We’re all lucky that he decided to stay.

“A consensus first team All-American in 1993 (AP, Kodak, FB News, Athlon’s, NFL Draft Report)… Earned second team All-America honors from UPI in 1993… A three-time All-Big 8 selection at safety, including first team honors in 1992 and 1993… K-State’s 1993 defensive MVP… One of eight semifinalists for the 1993 Thorpe Award (nation’s top defensive back)… Played in both the Senior Bowl and East-West Shrine Bowl all-star games in January 1994… Owns K-State records for both interceptions in a game (4 vs. Temple, 1992) and career (15)… Had six interceptions in both 1990 and 1992, third most on K-State’s single-season chart… Ranks third all-time at K-State in passes defended with 48… Member of K-State’s Football Ring of Honor.”…www.kstatesports.com

JM:  The four-interception game against Temple in 1992 remains ingrained in my memory to this day.  I was there in person and it was an awe-inspiring defensive performance by Mendez.

“With a scholarship offer from Ohio State, a dream come true for any Ohio native, Mendez backed out on his oral commitment and threw caution to the wind by signing with the new regime at Kansas State.”…Ken Corbitt, Topeka Capital Journal, October 11, 2013

JM:  Mendez could have ended up at Ohio State, but a connection with Bob Stoops is the reason he decided to choose Manhattan….

“Bob Stoops was the defensive coordinator when I got there, he was from my hometown, his Dad was my high school coach, and as much as I love Coach Snyder and he’s a mentor to me, I would have never went there if it wasn’t for Bob Stoops.  He was probably as influential in my career as anybody.”…Jaime Mendez, “The Drive With Bob and Jeff,” KFH Radio 1240, Wichita

“Coach Snyder was so convincing about what was going to happen. All they had were pictures — they had nothing — but they had pictures of what was going to transpire with uniforms, offices, indoor facilities. It was a great sales job. There’s no way if I was an adult with any sane sense about me that I would come here, knowing what I knew at that time.”…Ken Corbitt, Topeka Capital Journal, October 11, 2013

JM:  Remember how hard it was for Bill Snyder to recruit when he first got to K-State?

“Eric Wofford was the one who said that we can make our own history here,” he said. “Why go to Ohio State, Wisconsin, Penn State, Michigan or some place like that where we would be just another piece in the machine. We were B-list players, but Eric said let’s go start something and we thought, why not? If we turn things around, we might be considered legends. Twenty years later, here I am.

“I’m very proud to say I was in the first recruiting class, I’m proud to be in the hall of fame and to be in that first group of the football ring of honor. It’s very special.’”…Jaime Mendez, Topeka Capital Journal, October 11, 2013

JM:  I think he made the right decision.

“You know I joke with people all the time that I paid that guy to throw some my way.”

“It was just one of those nights.  I was just locked in.”

“The thing I remember most about that game is that I dropped one. I should have had five.”…Jaime Mendez, “The Drive With Bob and Jeff,” KFH Radio 1240, Wichita

JM:  This is Mendez responding to a question about his four-interception game.  Funny thing is I do remember that he should have had his fifth when he dropped a gimme in the 4th quarter.  Amazing.

“There’s a picture of me holding the Copper Bowl trophy right after the game was over and everybody says “what’s wrong with you?  You look sad” and I tell them “I WAS sad.  I was sad because I was never going to be with these guys again.”…Jaime Mendez, “The Drive With Bob and Jeff,” KFH Radio 1240, Wichita

JM:  This is a common theme among ex-athletes that I have spoken with.  The joy of a victory in the last game of your senior year is short-lived when the realization hits you that you’ve played your last game.

“Jaime Mendez III began his Brazilian Jiu Jitsu journey in New York under Daniel Gracie, Neiman Gracie and Gino Eunaidi in early 2011. Upon relocating back to LA he started training at 5 Star Martial Arts, now Renzo Gracie Los Angeles in late 2011 and received his black belt from Professor Shawn Williams in 2018. Jaime also has a black pra-jiad in Muay Thai under Kru John Spezzano. He is a 7 time IBJJF Masters World Champion and 2 time Silver medalist. Mendez also has experience in Aikido, Karate and Boxing.”…https://renzogracielosangeles.com

JM:  I don’t know what a lot of that means, but Mendez is a successful martial arts black belt and purchased “5 Star Martial Arts/Renzo Gracie Los Angeles” in July of 2019 and runs it to this day.

Hope you enjoyed reading a little bit about Jaime Mendez.  Up next is Sean Snyder.