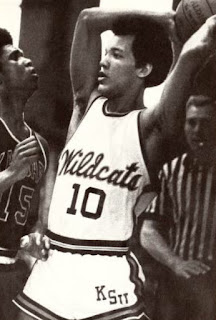 K-State great Chuckie Williams had his  jersey retired in 2006.  He played for the Wildcats and Jack Hartman from 1972-1976.  This is the last blog in my series of K-State basketball players that have their jerseys hanging from the rafters in Bramlage Coliseum.  Let’s learn a little bit more about Chuckie…
“In the fourth grade, he started playing basketball and excelled in the sport almost immediately. He became a star at powerhouse Columbus East High School where he earned Parade All-American honors his senior year. (childhood friend Gary) Owens said that Williams developed a jump shot in junior high that made him nearly unstoppable.”…Matt Schuman, Greeley Tribune, November 5th, 2006
JM:  Why can’t K-State basketball find a shooter like this anymore?  Anyone?
“’The Hall of Fame? You can’t even dream that you will be in the Hall of Fame,’ Williams said. ‘So no I never had that dream and yes, I am totally humbled by it.”’…Matt Schuman, Greeley Tribune, November 5th, 2006
JM:  Chuckie was inducted into the Kansas Sports Hall of Fame in 2014.
“They had chained nets and he could make them sing a song when he shot his jumper,” (childhood friend Gary) Owens said. “You thought a bird was out chirping when he came on the court because his jumper was so pretty.”…Matt Schuman, Greeley Tribune, November 5th, 2006
JM:  Wish I had some video highlights of this pretty jump shot.  Unfortunately, I was unable to find any.

“’I averaged 29 points as a junior and also averaged 29 points as a senior,’ Williams said. ‘Kansas State’s assistant coach, Bob Gottlieb, came up to Columbus (East High School) to visit, and it made an impression that they would come all that way to recruit me. He is the father of Doug Gottlieb, who played basketball at Oklahoma State, and is (now) a sports commentator/analyst. I was a Dapper Dan All-American, which is now a McDonald’s All-American. Bob Gottlieb played with Bobby Knight and those guys.”…Mack McClure, Manhattan Mercury, March 20, 2018

JM:  Bob Gottlieb was an assistant at K-State.  Forgot about that.

“The most important thing that Kansas State did that no other school did for me was give me a sense of security,” Williams said. “At 18, I was a long, long way from home, but when I took that visit, they made me feel like I had never left home.”…Matt Schuman, Greeley Tribune, November 5th, 2006
JM:  Chuckie was recruited by Southwest Louisiana, Louisville, Ohio State and Indiana out of high school and chose K-State not only because he felt at home, but so he could compete for championships every year.  Sure was a different aura around K-State basketball 40 years ago.
“Chuckie Williams, who had a game‐high 35 points, seemingly had given Kansas State the victory when he hit a 20‐foot shot from the corner. The Wildcats led, 76‐74, with only 5 seconds left to play.”…New York Times, March 23, 1975
JM:  Chuckie scored 35 points in the Elite 8 against Syracuse in 1975 and appeared to hit the game winning shot to send the Cats to the Final 4.  Unfortunately, Syracuse dribbled the ball down the floor and fed it inside to 6’9″ Rudy Hackett, who hit a left handed shot at the buzzer to tie the game.  Syracuse ended up winning in overtime.
“He held a school single-game scoring mark for 19 years with 47 points against Holy Cross in 1975, before Askia Jones’ 62-point effort against Fresno State in 1994.”…www.kstatesports.com
JM:  I recall the game that Ski Jones scored 62, but at the time I didn’t recall whose record he broke.  It was Chuckie’s.

“A career 47-percent shooter in college, Williams hit 621 of his 1,320 field goal attempts with the Wildcats. More than half his makes, he estimated, were 20-plus feet from the basket.

“That was like a layup for me,” Williams said with a laugh. “It was what the team needed at that time.”…Mack McClure, Manhattan Mercury, March 20, 2018

JM: Have I said that K-State needs a shooter like this?

“Following a career that saw him average 16.2 points on 47.0 percent shooting in 84 games, Williams became just the second player in school history to be selected in the first round of the NBA Draft when he was picked 15th overall by the Cleveland Cavaliers in 1976.”…www.kstatesports.com
JM:  At the time, Chuckie and Ernie Barrett were the only K-Staters that were NBA first round picks.

“Forty-two years ago, Bill Fitch, then the Cleveland Cavaliers’ general manager and head coach at the time, threw down the gauntlet to his 1976 first-round pick, Chuckie Williams.

JM:  What?  I have never heard of anything like this before.  Read on to see how this turned out…

“Of course, the stunt also had a catch: Fitch stood on a chair with his arms extended upward, creating an element of distraction. Williams, meanwhile, attempted 10 shots from beyond the top of the circle — 20 feet from the rim.

Williams never had the luxury of the 3-point basket in college or the NBA. The NBA introduced the 3-pointer in 1979-80, when Williams’ career had already begun to wind down with the Boston Celtics.

Yet he was able to answer Fitch’s challenge. And, with each make worth $10,000, he put on a dazzling display, much like his K-State career.

JM:  Not too bad!  That’s like making 8 out of 10 guarded three pointers with a lot of money on the line.  Big time!

“After playing just one season with the Cavaliers, Williams was released and picked up by the Boston Celtics. But he never played in an NBA game again, though he said he remained the Celtics’ roster and received paychecks. ‘I was diagnosed with A-Fib (Atrial fibrillation, a heart arrhythmia) and couldn’t play anymore,’ Williams said. ‘I didn’t tell a lot of people for a long time, and a lot of people have never known about it because I never talked to anybody (in the media) about it.”’...Mack McClure, Manhattan Mercury, March 20, 2018

JM: Chuckie may have had a long and prosperous NBA career had it not been for his health issue.

“ON WHETHER HE WATCHES THE NBA TODAY: ‘I’m not a big fan of today. Do I watch it? More so when it is getting close to playoffs times because I know they are really playing and earning their money.”’…Matt Schuman, Greeley Tribune, November 5th, 2006
JM:  Amen, Chuckie.  I gave up on the NBA regular season long ago, but I hardly even watch the playoffs anymore.  College basketball is my game of choice.