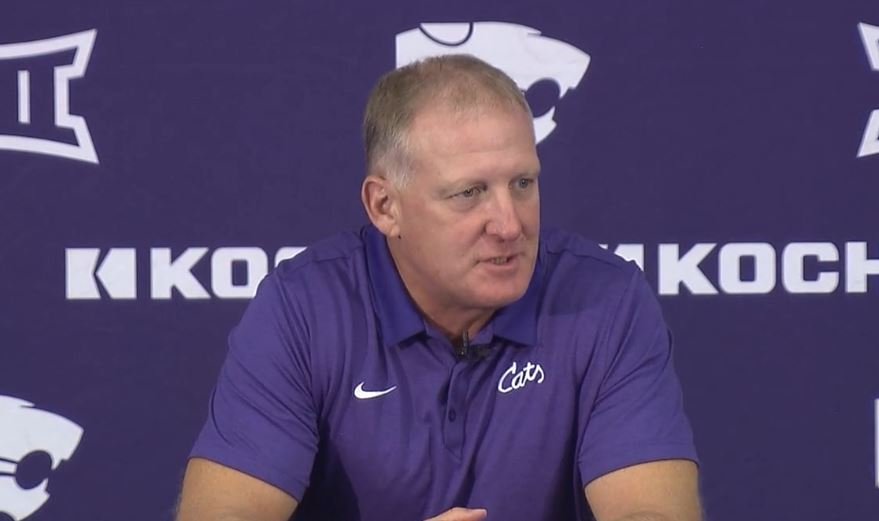 K-State finished their fifth fall practice today and Coach Chris Klieman met with the media afterward.  Klieman was very upbeat and excited about the upcoming season.  Here are some quotes of note from the press conference.

“For us as coaches, we like where we’re at and we think we’re much better than we’ve been here, at least in the last two years.”…Chris Klieman, August 10, 2021

JM:  One of the themes of the press conference was Klieman repeatedly talking about how he has a much better team in year three due to experienced players who are more comfortable with the playbook than they have been in the past.  It will be interesting to see if this translates to success on the field.

JM:  This was in response to a question about conference realignment.  It was nice to hear him say this.  Wish I had the same level of optimism.

“I saw it coming, that there’s going to be some drastic changes in the landscape of college football over the next three to five years, but it doesn’t happen overnight. So, we’ve told our players, many of our players probably won’t even see the effect of it, to be honest with you. I don’t know how long Oklahoma and Texas are going to play, if they play for one year or four years, I don’t know. But we’ve told recruits that same thing. We’re going play Power 5 football. We’re going to get a great schedule and have an opportunity to compete for championships.”…Chris Klieman, August 10, 2021

JM:  I think this will be the final year of the current Big 12 configuration.  Just a hunch I have that Oklahoma and Texas bail after this season.

“We should be able to play eight and nine guys for sure. And, based on a couple of young players, we could get up closer to 10 guys playing. So, we have more depth there.”…Chris Klieman, August 10, 2021

JM:  This was part of an answer to a question about the offensive line.  I’m glad there is depth at that position, but are we going to be able to avoid watching “two yards and a cloud of dust” with Courtney Messingham calling the plays?

“We’re excited that he’s here because that kid doesn’t drop any balls. If it’s in his area, he’s got strong hands and he makes plays.”…Chris Klieman, August 10, 2021

JM:  This was Klieman’s comment about Hutchinson Community College wide receiver transfer Tyrone Howell. If he really catches everything thrown his way, he could be a lot of fun to watch this fall.

“We have a ton more installation, which our offense is already difficult enough to defend with the trade, shift, motion. Now you do that and you play it so much faster – which our guys are doing right now – I’m excited to see where we can go.”…Chris Klieman, August 10, 2021

JM:  This press conference got me pumped up for some football!  But is it all fluff?  Guess we’ll find out.