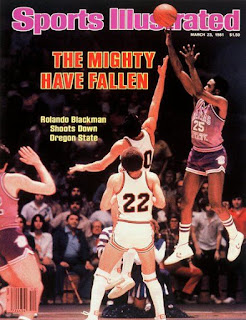 In one of the most famous K-State basketball victories ever, eight seed Kansas State beat one seed Oregon State 50-48 in the second round of the 1981 NCAA tournament.  Rolando Blackman hit a last second shot to give K-State the victory, earning a spot on the cover of Sports Illustrated.  Here are some notable quotes about the game.

“For another old-timer, Oregon State’s Ralph Miller, a better team may not pass his way than the Beavers who brought a two-year 52-4 regular season record into the West sub-regional at Los Angeles.  But they also lost primarily because of too much dependence on one man, he being the big moose with the big caboose, 6’10” center Steve Johnson.  ‘We were too timid.  We didn’t play our game.  I don’t know what went wrong,’ said Johnson after Kansas State eliminated Oregon State 50-48.”…Curry Kirkpatrick, Sports Illustrated, March 23, 1981

JM:  It’s always interesting to me to see how both sides react and comment on a game result.  Oregon State clearly thought they choked this one away.

“Hold on and back up a bit.  K-State Coach Jack Hartman’s squad is in his image – quiet, colorless, collected; a friendly hardware dealer camouflaging the mind of a crafty terrorist.”…Curry Kirkpatrick, Sports Illustrated, March 23, 1981

JM:  I found this to be an interesting way to describe both Jack Hartman and his teams.  Mind of a crafty terrorist?  Could you get away with calling someone that today?

“Down by 12 points against San Francisco, Hartman had replaced his struggling star, Rolando Blackman, with Brazil’s own Eduardo Galvao, who despite being called “Ed-weirdo” by his teammates, was instrumental in the Wildcats’ 64-60 victory.  Then, against Oregon State, Hartman went from Edweirdo back to Rolando, who showed his appreciation by sinking the gamer with two seconds left.”…Curry Kirkpatrick, Sports Illustrated, March 23, 1981

“Before that happened, Kansas State plugged along 10 points in arrears until 6’7” Center Ed Nealy and his backup, Les Craft, wore down Johnson and forced him into fouls and turnovers so that the ‘Cats could proceed on a 16-6 tear and tie the game at 48 with 3:23 to play, precisely the point at which Johnson fouled out for the 51st time in his career. “…Curry Kirkpatrick, Sports Illustrated, March 23, 1981

JM:  K-State was down double digits in both the first and second round games and ended up making the Elite 8 in this tournament.  This was not a great K-State team.  At least they weren’t considered great throughout the season.  They weren’t ranked all season and finished 9-5 in the Big 8 and 24-9 overall.

JM:  When K-State tied the game with 3:23 to play, neither team scored again until the last second game winner by Blackman.

“Miller elected to slow things down, but the Wildcats fouled Charlie Sitton, who, being a  rookie, missed on the one-and-one.  Kansas State then held the ball down to 10 seconds when Blackman, the Olympian from Brooklyn, backed Mark Radford to the baseline, where they were joined by Blume.  ‘He made a good strong move and I cut him off,’ said Radford.  ‘Then he made another strong move.’…Curry Kirkpatrick, Sports Illustrated, March 23, 1981

JM:  How many times have you seen a player with an opportunity to win the game with free throws and miss them?  Sitton missed the front end of a one and one with 10 seconds left?  Yikes!

“It was the second one – Blackman spinning in the air from 16 feet, swish – that did it.  ‘I had the good release,’ Blackman said.  ‘I wasn’t even aware that anyone was on me.  It was just me and the rim.’…Curry Kirkpatrick, Sports Illustrated, March 23, 1981

JM:  Watch the video below of the game winning shot.  There was a defender all over Blackman right in his face and it was actually great defense.  The fact that Blackman was so focused on scoring that he wasn’t aware that anyone was guarding him is simply amazing to me.  And it also a sign of a great player.

JM:  This was the headline of Tim Layden’s article in Sports Illustrated reflecting back to Kansas State’s upset of one seed Oregon State on March 14, 1981.  Is this game where the term “March Madness” originated?  It would be interesting to know if the term was used prior to this game.

“The last shot fell at a little past three on a Saturday afternoon in Los Angeles. Rolando Blackman, a willowy 6-foot-6 Kansas State senior from Panama by way of the Bronx, pounded three dribbles to the right baseline and rose quietly off the floor before stroking a jumper that gave the Wildcats a 50-48 lead over Oregon State with two seconds to play in their NCAA tournament game at Pauley Pavilion.”…Tim Layden, Sports Illustrated, March 14, 2012.

JM:  Willowy?  I actually looked it up to see what it means.  The definition is “tall, slim and lithe.”  Guess that’s a good description.

“Oregon State was ranked No. 2 in the nation after spending much of the regular season at No. 1, and now was almost certain to exit the tournament without winning a game. NBC play-by-play announcer Jay Randolph shouted his call — ‘A 16-footer from the deep right corner has put the Wildcats on top!” — but his voice is scarcely audible on the game audio beneath a thunderous explosion of noise. Oregon State missed a long heave at the horn and then came another roar.”…Tim Layden, Sports Illustrated, March 14, 2012.

JM:  The top four seeds in each region received first round byes.  I hadn’t realized until now that this was Oregon State’s first game in this tournament and was K-State’s second.

“It was the concluding act in a daylong drama that stands as one of the seminal moments in what has come to be known — and trademarked by the NCAA — as March Madness.”…Tim Layden, Sports Illustrated, March 14, 2012.

”’I wanted the ball,’ said Blackman. ‘I got it with eight seconds left and I wanted to go one-on-one on the baseline. I knew it was going in. The rhythm felt good.”’…New York Times, March 15, 1981

“The basket by Blackman, from Grady High School in Brooklyn, gave the Wildcats their only lead of the game and helped erase some bitter N.C.A.A. tournament memories of the past two years. Kansas State was beaten by eventual champion Louisville in overtime last March and suffered a close defeat to Marquette two years ago.:…New York Times, March 15, 1981

JM:  This just reiterates to me what it takes to be successful in the NCAA tournament.  You have to be good enough to get there every year and eventually you’ll get some breaks.

JM:  K-State lost to North Carolina in the Elite 8 after beating San Francisco, Oregon State and Illinois.  That was a North Carolina team led by Sam Perkins and James Worthy that lost to Indiana in the national championship game.

“That someone else turned out to be the Beavers, who were undefeated and ranked No. 1 during most of the college season, before losing the season finale to Arizona State a week ago today.”…New York Times, March 14, 1981

JM:  This wasn’t just an 8/1 upset, it was an upset of a team that was considered the best team in the country and the favorite to win it all.  What a great win in K-State sports history!