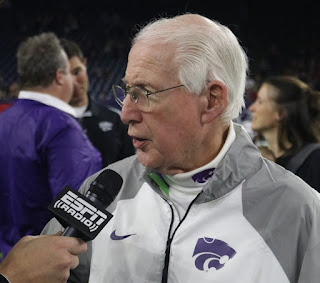 Bill Snyder is releasing his autobiography this fall, co-authored by D. Scott Fritchen, titled “My Football Life and the Rest of the Story.”  If I ever get the opportunity to talk to Bill Snyder again, there are a bunch of questions I’d like to ask him.  I’m hoping some of these questions will be answered in his book.

I thought it would be fun to make a list of questions to ask and hypothesize what his answers might be.  As I was putting my questions to paper the list became pretty long.  Some are serious and some are fun and lighthearted, but I narrowed it down to seven for the purposes of this article.  Here we go…

1)  Were you ever close to leaving K-State?

I was a student at K-State from 1991 to 1996 and rumors were swirling around almost every season that Snyder might leave and go coach elsewhere.  Luckily they were just rumors and they never came to fruition.  There was also a rumor that Jerry Jones wanted to hire Snyder to coach the Dallas Cowboys.  I don’t know if Snyder would ever verify that rumor, but I’d sure love to ask the question.

2)  Can Kansas State win a national championship in football?

Bill Snyder came close.  Chris Klieman seems to have the know-how to be a successful football coach at this level, but it’s a very difficult job to win in football in Manhattan.  The fan base is rabid and the facilities are nice and always getting better, but finding the right group of talented players is the main challenge.  I wonder if Snyder thinks someone else may be able to get it done or if he thinks it’s too difficult of a job for anyone to handle in the current environment of college football.

3)  Who was the best player you ever coached?

Snyder has coached some great players.  Michael Bishop, Ell Roberson, Darren Sproles, Mark Simoneau, David Allen, and Terence Newman come to mind as some of the best.  I’d love for him to tell me who is the best player he’s ever coached and why.

4)  Who is the best coach you coached against?

Snyder has coached against and won games against some of the great coaches of all time.  Tom Osborne, Don James, Bob Stoops, Pete Carroll, Phil Fulmer, and Jim Tressel come to mind.  I’d love to hear which coach or coaches presented the biggest challenge for him and his team.

5)  What is the difference between whipped butter and pats of butter?

Snyder infamously chastised a caterer for serving pats of butter during a team meal instead of whipped butter.  I have yet to hear him explain why this matters!

6)  Did you really make Nebraska’s players sit on the sunny side of the plane to Tokyo in 1992 so that your players were better rested?

It was kind of a genius chess move that might have made Bobby Fischer jealous, but does Snyder feel like it paid off?  When the teams played late in the 1992 season, Nebraska was ranked number 11 in the country and K-State entered the game struggling with a 5-5 overall record, 2-5 in the league.  Nebraska won 38-24, which was a much closer game than anyone thought it would be.

7)  Why is Taco Bell your favorite restaurant in Manhattan and what do you order when you go there?

Does Bill Snyder love Taco Bell or does he just go there to eat because it’s close to the football offices?  And why does he only eat one meal a day?  I’ve never been a huge Taco Bell fan, so it’s always been a bit perplexing to me that Snyder chooses Taco Bell above all others!

What would you ask Bill Snyder if you had the opportunity to sit down and chat with him?