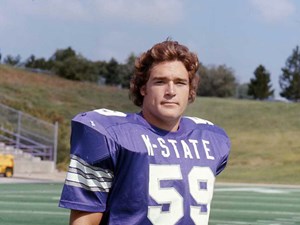 Gary Spani was part of the inaugural class of the Kansas State football ring of honor in 2002.  Spani was born in Santana, Kansas but was raised in Manhattan and graduated from Manhattan High School in 1974.  He was a dominant player not only at K-State but in the NFL with the Kansas City Chiefs as well….

JM:  Spani was inducted into the College Football Hall of Fame in 2002 and the excerpt above is the first sentence of his Hall of Fame write-up.  Could he be considered the greatest football player in K-State history?  At first, I thought “no way,” but as I looked into the numbers and his many accolades, it would be hard to make an argument that he is not.

JM:  Spani put Kansas State “on the map” as far as the Hall of Fame is concerned.

“Spani, a Kansas native, become Kansas State’s first consensus All-America in 1977. He was a Heisman Trophy Linebacker Award finalist and was named defensive MVP in both the East-West Shrine Game and the Japan Bowl. A three-time All-Big-8 Conference selection, he was recognized as the Defensive Player of the Week four times, becoming the first player in Big-8 history to repeat all four years.”…College Football Hall of Fame website

JM:  That’s a lot of accolades, but what stuck out to me was winning defensive player of the week in each year that he played, four years in a row.  Wow.

“He averaged 17 tackles per game his senior year, and recorded at least 20 tackles in four games.”...College Football Hall of Fame website

JM:  It’s not an overstatement to say that Spani is one of the greatest tacklers of all time.  Not only is he the K-State career leader in tackles, but he also held the Kansas City Chiefs record for career tackles until it was recently broken by Derrick Johnson in 2015.

“His defensive coach Dick Selcer said, ‘Watching Spani play was like watching a falcon hunt for small prey. Gary’s precision to dissect a play and then wreak havoc was incredible to watch. His instinct as a linebacker is the best I’ve ever seen or coached.'”...College Football Hall of Fame website

JM:  Spani is the leading tackler in K-State history and second place isn’t even close to him…. 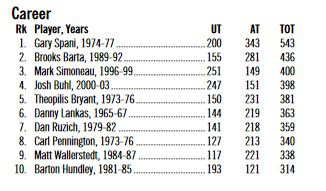 If you look at the top 10 total tackle seasons in K-State history, Spani is on the list three times. 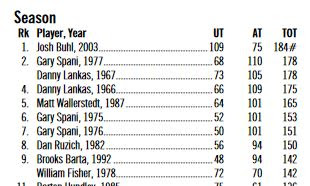 “Gary was a third round draft choice of the Kansas City Chiefs, where he starred for nine seasons and retired as the leading tackler in franchise history. Selected for the Miller/NFL “Man of the Year” Award in 1983, and voted NFL O’Grady’s “Crunchman of the Year” in 1984; he is also an inductee of the Kansas City Chiefs Hall of Fame. Spani is a member of the Kansas State Sports Hall of Fame and Ring of Honor, K-State’s All-Century Team, AP’s All-Time Big-8 Team, and has been named to Sports Illustrated’s 50 Greatest Players of the 20th Century from the state of Kansas.”...College Football Hall of Fame website

JM:  The Chiefs waited until the third round to draft him?  And every other team passed on him multiple times?

“When asked about his record of 999 tackles and whether or not he’d prefer someone to go back and find a tackle somewhere that might have been missed to get him to that 1,000th tackle, Spani said he likes it right where it is.

JM:  Spani ended his professional career as the Kansas City Chiefs record holder for total tackles with 999.  I always thought that was an odd number to end on and was glad I found an article where someone asked him about it.

‘”Kim Kramer and Bill Maas were two guys that took the double teams on the defensive line. Then you’ve got Art Still and Mike Bell as our defensive ends—that really helped as well.’

Spani also mentioned former great and Pro Football Hall of Famer Willie Lanier may have had even more tackles than him, but that was before tackles were kept as a statistic.”…Chiefs.com, September 28, 2015

JM:  Those are some humble comments from Spani.  Although the Chiefs didn’t have many victories during Spani’s time playing linebacker for them, they had some great players on the defensive side of the ball.

“In just his first season, Spani became the starter at right inside linebacker and went on to lead the team in tackles in the next four seasons.  He started almost every game for the rest of his nine seasons and finished with over 100 tackles in five of those. His signature season came in 1979 when he broke the (Chiefs) record with 157 tackles, a record that stood until 2002.”…Jordan Mannix, Arrowhead Addict

JM:  Holding the Chiefs’ single-season tackle record for 23 years is quite an accomplishment.

“Named one of Sports Illustrated’s 50 Greatest Players of the 20th Century from the state of Kansas.”…Missouri Sports Hall of Fame

JM:  Spani has five daughters that played basketball.  Shalin played at K-State and Tabor played for Pat Summitt at Tennessee.

JM:  Spani works in the Kansas City Chiefs front office to this day.

Where does Spani rank on your list of the greatest K-State football players?  He ranks pretty high on my list.