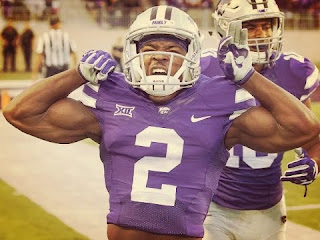 The Kansas State football NFL draft streak reached 25 years this year when DJ Reed was drafted in the fifth round, number 142 overall, by the San Francisco 49ers.

According to ninersnation.com and their “best case/worst case” scenario, DJ could make the team as either a return man or slot cornerback as best case scenario or be placed on the practice squad as a worst case scenario.  However, I found an article on CBS Sports today that says that DJ is practicing with the 49ers first team defense as starting slot corner since Richard Sherman is currently out with a hamstring injury.  Looks like he is doing pretty well so far in training camp.