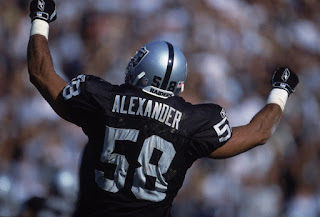 K-State didn’t have anyone drafted in the 1993 draft, but if they had the draft streak would be sitting at 27 right now instead of 25.  The Wildcats had three players selected in 1993:  Defensive back Rogerick Green, Tight End Russ Campbell and Linebacker Elijah Alexander.

Rogerick Green was drafted in the fifth round, number 118 overall, by the Tampa Bay Buccaneers.  He played three seasons for the Buccaneers and played his final NFL season in 1995 with the Jacksonville Jaguars.

Russ Campbell was drafted in the seventh round, number 179 overall, by the Pittsburgh Steelers.  He played in seven games for the Steelers in 1992.  Russ didn’t have a long NFL career, but ended up going into teaching and is currently a real estate investor in Wichita.

Elijah Alexander was drafted in the tenth round (This was the final season the NFL draft was 10 rounds), number 254 overall, by the Tampa Bay Buccaneers.  According to his Wikipedia page, he appeared in 12 games for the Bucs that season.  In 1993 the Denver Broncos claimed him off waivers and he appeared in 16 games.  In 1994, he started all 16 games and registered a career high 88 tackles and 244 assists.  He played in only nine games in 1995 due to a shoulder injury. The next year, with the Indianapolis Colts, he struggled with a hamstring injury at the beginning of the season but appeared in 14 games. In 1997, he played in 13 games, starting eleven of them, and he collected 52 tackles. He spent two more seasons with the Colts, collecting 52 and 51 tackles, respectively. In his last two seasons, 2000 and 2001, Alexander started 29 games for the Oakland Raiders and registered a total of 90 tackles for the team.  Alexander was diagnosed with cancer in 2005 and died in 2010 at age 39.  I found a neat interview with his wife that talks a bit about his life.  She mentioned that one of his sons went to K-State as well.