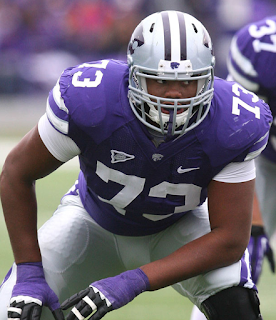 The Kansas State football NFL draft streak continued in 2014 when offensive tackle Tavon Rooks was drafted in the 6th round, number 202 overall, by the New Orleans Saints. Rooks was a member of the Saints practice squad as a rookie but was released after the season and signed by the Arizona Cardinals.  He was cut in June, 2015 by the Cardinals and was signed by the Kansas City Chiefs.  Rooks suffered a heart attack during training camp in August of 2015 and was placed on the medical injured reserve list and was eventually released.

According to the article linked above, Tavon seems to have recovered from the heart attack, but his football career ended rather suddenly because of his medical issues.  I am unable to find anything about what Tavon is up to now.