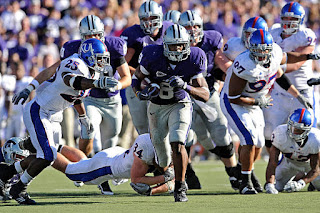 The K-State NFL draft streak continued in 2011 when running back Daniel Thomas was selected in the 2nd round, number 62 overall, by the Miami Dolphins.  Daniel played four season for the Dolphins, playing in 52 games and starting three of them.  His best season was 2011 when he had 581 yards rushing.  His NFL stats are below:

Since his last on-field action, Daniel signed with the Bears and once again with the Dolphins but didn’t see the field during any of those stints.  He recently signed with the Saskatchewan Roughriders of the CFL in 2017.  I found an article on their website highlighting the signing of Daniel in which he talks about his career path and how he ended up there.

I looked at their current roster and Daniel is not listed on it.  I can’t find any articles online that say he was cut, either.  I’m not sure what he’s up to now.