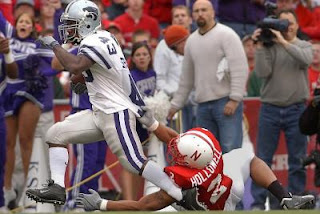 Darren Sproles was the only K-State player selected in the 2005 NFL draft, year 11 of the streak.  He was drafted in the 4th round, number 130 overall, by the San Diego Chargers.  He has played 13 seasons in the NFL with the Chargers, New Orleans Saints and Philadelphia Eagles.  He won a Super Bowl with the Eagles in 2018, although he finished the season with an injury and couldn’t play in the game.  He was selected to Pro Bowls in 2014 and 2015.

You can view his NFL stats here.  He has not only played running back, but has been a punt and kickoff return specialist as well.  He currently ranks as number eight ALL TIME on the NFL all purpose yardage list.  Everyone else in the top 10 is in the Hall of Fame with the exception of Brian Mitchell.

Here’s a 73 yard touchdown catch by Sproles last season by Carson Wentz versus the Steelers:

And here’s a video compilation of Sproles’ career highlights: