In researching Kansas State football players that were selected during the NFL draft streak, I noticed some K-State players from earlier drafts that I had never heard of before.  That got me curious about unrecognized K-State players that found success at the next level.  Off the top of my head I could think of Lynn Dickey, Steve Grogan, Darren Sproles, Terrence Newman, and Jordy Nelson.  When I looked back, I found plenty of other K-Staters that found success in the NFL or AFL.  I started to write about them in one blog post but found enough information about each person that I decided each should get their own post.

I’ll start with Ron Nery, who played at K-State and was drafted as a tackle for the New York Giants in 1956.  He never did play for the Giants, instead signing as a defensive end for the San Diego Chargers and would eventually become part of their famous “Fearsome Foursome.”  Nery was an AFL All-Pro in 1961. 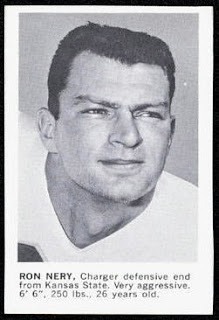 Here is an article that talks a bit about Nery’s interesting journey to the AFL that includes quotes from Nery himself. 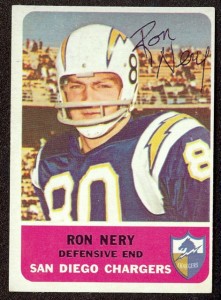 Nery also played for the Broncos and Oilers during his short stint in the AFL.  He died on April 2nd, 2002 at the age of 65.