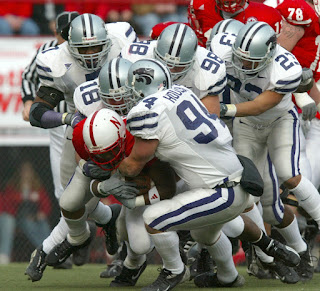 This will always be one of my favorite K-State games.  Nebraska was ranked number 18 in the country at the time and the game was in Lincoln.  K-State had not won in Lincoln in 45 years.  45 years!  Ell Roberson racked up 403 yards of total offense.  This one was on national television on ABC and the winner was going to wrap up the Big 12 north and head to the Big 12 championship game.  It’s also remembered for Bo Pelini shouting at Bill Snyder after the game for running up the score and for Frank Solich getting fired after the season because it just wasn’t acceptable for Nebraska to lose to Kansas State at home!

This game also gave us this famous picture of Darren Sproles dragging a Nebraska defender into the end zone. 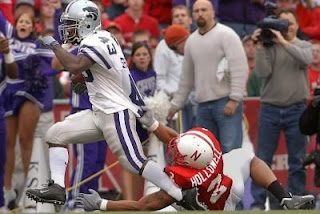 The game was tied 7-7 at halftime but K-State turned it on in the 2nd half with 24 unanswered points and then tacked on a touchdown at the end for the final 38-9 margin.

Reading the ESPN write-up of the game brought back some good memories.

I told a buddy of mine afterwards that I thought we could beat Oklahoma, who many were calling the “greatest college football team in history” at the time.  I had watched a lot of both OU and K-State that season and felt like K-State had a great shot against them.  I was right!

The entire broadcast of this one is on YouTube as well.